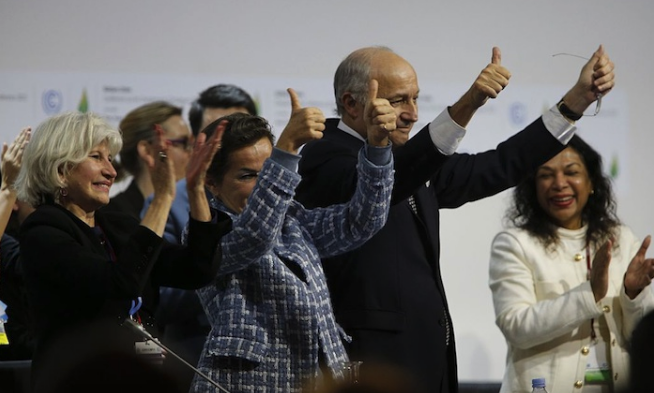 Leaders from across the world have welcomed the new climate change agreement signed by 195 nations in Paris on Saturday.

United States President Barack Obama called the agreement “the best chance we have to save the one planet that we’ve got.”

Speaking at the White House, he said: “The Paris agreement establishes the enduring framework the world needs to solve the climate crisis. It creates the mechanism, the architecture, for us to continually tackle this problem in an effective way.”

He added: “I believe this moment can be a turning point for the world.”

The new accord, set to take effect from 2020, received a consensus from all the nations present at the 21st Conference of Parties (COP21). It seeks to limit global warming to below two degree Celsius and strives to keep it at 1.5 degrees.

It also calls for limiting the amount of greenhouse gases emitted by human activity; reviewing each country’s contribution to cutting emissions every five years; and for rich countries to provide poorer nations “climate finance”.

“We are pretty happy as the UAE with this proposed deal because we were able to achieve all our goals in terms of the negotiations and what we wanted to see in the deal,” he said.

In a statement, managing director of the International Monetary Fund Christine Lagarde said the Paris agreement is a critical step for addressing the challenge of global climate change.

“Governments must now put words into actions, in particular by implementing policies that make effective progress on the mitigation pledges they have made,” she said.

“That is why my key message is to price carbon right and to do it now. Charging for the emissions of fossil fuels puts in place the needed incentives for low-carbon investments; it also provides revenues to safeguard the poor, reduce debt, and lower the burden of other taxes on households and businesses. We look forward to dialogue on carbon pricing and helping governments put this vital policy into practice.”

However, the accord was also criticised for not being specific on targets. International environmental group Friends of the Earth chief executive officer Craig Bennett opined that the climate deal was “far short of the soaring rhetoric from world leaders” less than two weeks ago.

“An ambition to keep global temperature rises below 1.5 degrees is all very well, but we still don’t have an adequate global plan to make this a reality. This agreement leaves millions of people across the world under threat from climate-related floods, droughts and super-storms,” he said in a statement.

However he admitted that the agreement was “historic”.

“People power across the world has forced governments to start taking this issue seriously – and people power will win the day,” he added.