The World Bank has lowered its 2016 growth forecasts for Bahrain, Kuwait, Oman, Qatar, Saudi Arabia and the UAE due to lower oil prices.

“Both oil-exporting and oil-importing countries face substantial fiscal challenges. While expenditure cuts in oil exporters implemented in 2015 and underway in 2016 are a step in the right direction, additional cuts are needed to achieve fiscal sustainability, together with a boosting of non-oil-sector revenues—through tax increases, policy changes encouraging private sector participation and investment, or other changes,” the organisation noted in its June report. 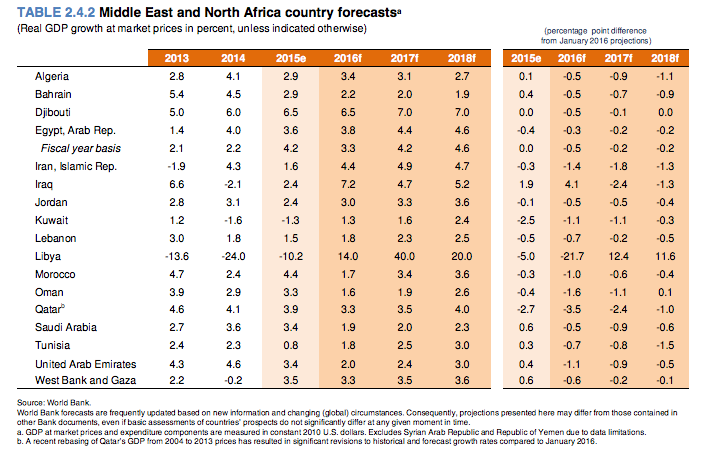 The World Bank went on to warn that the recent reliance on sovereign debt issuance, like Qatar’s record bond issue last month, meant countries “should ensure that they have solid debt management frameworks in place”.

It said if annual oil prices do not reach a “trough” in 2016 it would likely trigger an additional downgrading of the forecast for oil exporters in the region.

“The downward pressure on growth from fiscal consolidation will be reinforced in the GCC countries by tightening monetary policy in tandem with any rate increase in the United States,” the bank said.

More broadly, the World Bank said the Middle East and North Africa region would grow 2.9 per cent this year, largely due to the lifting of sanctions against Iran.

Brent crude prices recently broke the $51 a barrel mark after hovering around $50.