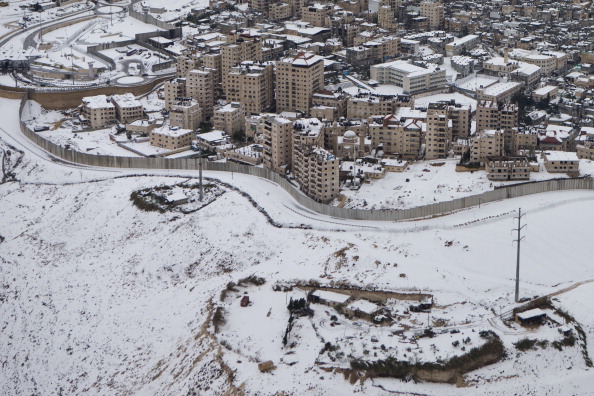 A powerful winter storm sweeping the eastern Mediterranean this week is causing mayhem across the region and inflicting extra hardships on Syrians convulsed in civil war and on refugees who have fled the fighting.

The storm, named Alexa, has brought snow, rain and cold to swathes of Turkey, Syria, Lebanon, Jordan, Israel, the Palestinian territories and Egypt.

The bad weather, which began on Wednesday, is taking a disproportionate toll on the 2.3 million refugees living outside Syria and the 6.5 million people displaced within the country.

Biting cold and heavy rain beset Zaatari camp, which houses 80,000 of Jordan’s more than half a million Syrian refugees.

Among them was Khalil Atma from Sanameen in southern Syria who was shivering with his two daughters in a flooded, unheated trailer. “We have come from one tragedy to another,” he said.

Aid agencies say they are working around the clock to evacuate refugees from flooded camps and distribute food, supplies and clothing, but cannot keep up with demand.

“People are saying to me … that the help we’re able to give them is really not necessarily enough,” she told Reuters by telephone during a weather-disrupted visit to Lebanon.

More than 835,000 Syrians have taken refuge in Lebanon, huddled in tents, unused buildings or with friends or family.

In Turkey, authorities distributed extra blankets and clothes to many of the 206,000 Syrian refugees in border camps, said Mustafa Aydogdu, spokesman for the prime minister’s disaster relief agency AFAD.

Refugees in 16 tent cities and six container camps were also given oil-generated heating lamps to reduce fire risk. Snow removal and firefighting teams have been set up at the camps.

FIGHTING IN THE SNOW

Despite the weather, shelling and clashes raged on this week in Syria, where rebels have been fighting for more than 2-1/2 years to bring down President Bashar al-Assad.

Photos from the central Syrian city of Homs revealed snow covering blocks of houses devastated by two years of street fighting and air strikes. Al Arabiya television broadcast an image of a child said to have died from exposure in Syria.

The World Food Programme said it was distributing 10,000 litres of fuel for cooking and heating to internally displaced families living in 10 shelters in Damascus.

The snow also prevented the start of a United Nations airlift to bring relief supplies from Iraq to tens of thousands of people in Syria’s remote northeastern Kurdish areas.

A snowstorm of rare intensity blanketed the Jerusalem area and parts of the occupied West Bank, choking off the city and stranding hundreds in vehicles on impassable roads.

Israeli authorities said at least 50 cm (20 inches) of snow had fallen since Thursday and more was forecast.

“In my 54 years I don’t remember a sight like this, such an amount I cannot recall,” said Nir Barkat, mayor of Jerusalem.

Israeli troops helped police rescue more than 2,000 people stranded in vehicles near Jerusalem, many of whom had spent the night in their cars. More than 500 were given makeshift shelter in a city convention hall.

Highways into the city were shut, with ploughs impeded by falling snow and freezing cold. Broken branches brought down electricity wires leaving tens of thousands without power, Israeli media said. Residents were told to stay at home.

Despite the storm, U.S. Secretary of State John Kerry met Prime Minister Benjamin Netanyahu in Jerusalem on Friday to try to spur lagging peace talks. He had met Palestinian President Mahmoud Abbas in the West Bank city of Ramallah the day before.

The storm forced Kerry to cut short his session with Abbas to return to Israel before the roads and border-crossings shut.

A Palestinian front-end loader cleared his convoy’s path through blinding snow to the Israeli border where Israeli police escorted it back to the hotel. The trip, usually 45 minutes, took more than two hours.

Israel set up a joint command centre with Palestinian security in the West Bank to handle storm-related traffic and electricity problems.

Flurries of snow surprised residents in the Gaza Strip, but heavy rain also hit the Palestinian territory, making many roads impassable. Emergency workers used fishing boats to evacuate 700 people from their homes and provide food, blankets and torches to hundreds of others caught in high water.

Ismail Haniyeh, prime minister of the Hamas administration, called for fuel to be allowed into the coastal enclave.

“Gaza survived two wars (against Israel) and it will walk out of this,” he said, wearing the yellow jumper of emergency workers as he toured affected areas overnight.

The Israeli military said on Friday it had opened a crossing with Gaza in response to a U.N. appeal to let in aid supplies.

In Turkey’s Sirnak province along the Syrian border, hundreds of people were stranded in their vehicles as snow blocked a main highway, media reports said, adding that Turkish Red Crescent teams were taking food and blankets to the area.

Separately, local media reported two people were buried under an avalanche in Semdinli, near the border with Iran.

Snow and hail also struck Egypt’s Sinai Peninsula, Cairo and other cities, where such weather has not been seen in years.