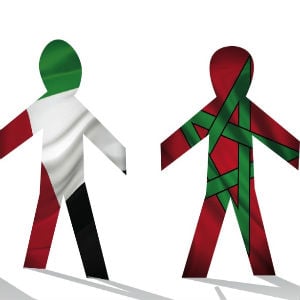 On paper Morocco is a shoe-in to join the ranks of the Gulf Co-operation Council. With the Arab World’s oldest monarchy it more than exceeds the political prerequisites for entry. Economically, the North African nation has remained fairly robust, with low inflation, a healthy tourism industry and a fledging Islamic banking sector.

Yet in reality there has been close to no consensus from GCC states over Morocco – or Jordan, which is also in the running to be admitted into the six- member group.

At the end of 2011, UAE Foreign Minister Sheikh Abdullah bin Zayed al-Nahayan said: “We must learn from the experience of the European Union, which at some point accepted 10 countries to its membership and look now what happened with the euro. There is no consensus at the moment to include Morocco and Jordan.”

It’s possible that increasingly violent unrest among students protesting high unemployment may have spooked Gulf rulers, who are still twitchy about the spread of the Arab Spring.

Ironically though, the handling of the protests was originally cited as a primary reason for accepting Morocco’s request.

There has been a year of unease around joblessness, but mostly Morocco has avoided the full-blown revolts witnessed elsewhere. A broadly respected King Mohammed VI that has been open to reform and a powerful army have kept tensions to a minimum.

Cynics said the GCC saw Morocco as a chance to consolidate military resources and get troops on the ground if protests escalated in the Gulf.

But with the strong ties that the UAE, Saudi Arabia, Bahrain and others have with Western powers, there seems little reason they would need Morocco’s military.

So how serious is the threat of increasing violence in Morocco and is it a deal-breaker? Well, lack of progress on job creation has whipped up support for protests. While Morocco’s economy has been growing steadily at around 4 per cent annually for the past several years, the growth has not been able to provide enough employment to the millions of young people entering the workforce every year.

Unemployment is officially 9 per cent and rises to at least 30 per cent for those under 34 years of age.

Because of this most Moroccan cities witness regular demonstrations by groups of unemployed youths, often university graduates, with some marches turning into days of battles with riot police.

Trevor McFarlane, senior editor for the Cemea region at the Economist Intelligence Unit, said developing labour- intensive industries like tourism could be a step in the right direction. “There’s an unemployment issue that could sow the seeds of further discontent in Morocco. They need to come up with industries that employ a lot of people, so tourism is a good one.”

It would also provide opportunities for GCC countries, which have spent the last decade establishing tourism hubs in their own backyard. These skills are “transferable”, according to McFarlane, and could offer one of many inflows of investment from the highly liquid Gulf. “The UAE might have an advantage here purely from a reputational perspective with companies like Abu Dhabi’s TDIC and Dubai’s Emaar.”

He added: “Gulf sovereign funds could develop a fund in conjunction with a Moroccan entity, which in turn becomes a catalyst for development. For instance, they will create the necessary roads and infrastructure needed for tourism to flourish.

“Then other private companies from the GCC will be able to exploit the subsequent opportunities. As always is the case, private sector money follows public sector money.”

Morocco has suffered a dramatic collapse of European tourists in recent years thanks to the economic uncertainty around the Eurozone debt crisis and more recently the terrorist bombing in Marrakech in April last year. Admittance into the GCC and a subsequent rise in Gulf holidaymakers would be a welcome change in fortunes for Morocco.

Since last November’s elections, which swept the Islamist Justice and Development Party to power, there has been some exuberance around Islamic banking and finance.

Among the party’s promises was to establish the first Sharia-compliant bank in Morocco. Indeed, only a few days after taking control of the government, the party’s leader held talks with the president of the Qatar International
Islamic Bank about opening Islamic financial institutions in the country.

Allowing Islamic banks to operate in Morocco has been at the center of public debate in the Middle East for some time, but its development has lagged behind the rest of the region partly due to lack of interest from the former government.

“The Qataris are hoping it’s a new frontier for Islamic banking and finance,” said Peter Grimsditch, editorial director at Oxford Business Group. “Morocco is wide open now for Islamic institutions, but it has the added extra of being Islamic without being assimilated to Al Qaeda.

“The Qataris want to get in on the act first. Compare this to their stance on Egypt, where they will be slower to invest because of the volatility.”

So far, apart from political pledges, the governor of Bank Al-Maghrib, Abdelatif Jouahri, has said that Morocco’s financial sector is willing to incorporate Islamic banking, and that necessary regulations will be formulated to accommodate it.

“GCC investment in Morocco is not new,” said Grimsditch. “You can go back to 2005 and see interest from the Gulf. Today, Morocco has a very low inflation rate, so once you put your money in it won’t be eaten up by inflation.

“There’s an opportunity for Gulf Arabs to make money in an environment that’s been relatively untouched by the Arab Spring. GCC investors will see it as a much more stable option than the rest of the North African coast. And will probably be encouraged by the developments on the Islamic finance front over the last few months after the elections.

“The elections will be seen as a peaceful transition from absolute rule to something that’s much closer to participation by the people,” he added.

SO WHAT’S IN IT FOR MOROCCO?

Apart from the financial and political security of joining the Middle East’s elite club, Morocco may yet negotiate with the GCC a favourable deal on energy prices.

In recent years, the high price of oil has stymied efforts to tackle Morocco’s rising budget deficit – which in the 2011 budget stood at five per cent of GDP.

The government’s pledge to stabilise fuel prices through substantial subsidies has left the country battling a weakening national balance sheet.

At the end of July 2011, Morocco’s trade deficit rose by an alarming 21 per cent over the same period of 2010, an increased that is attributed mainly to the soaring energy imports bill which increased by 39 per cent.

There may be a window of opportunity with the GCC to redress the balance. It could push for special privileges during talks with GCC leaders, however, the likelihood of any major concessions will be limited and could depend on the future price of crude. Either way, now is the time to ask.

Ultimately, Gulf rulers have to decide whether Morocco can fulfil its promise as a stable, reliable partner in the region, and conclude whether there is enough upside to include the country in their club.

Indeed, some have argued the point that if it ain’t broke don’t fix it, viewing the growth of the GCC with trepidation in light of the European Union and Eurozone crisis. Recent history suggests then that any type of expansion on this scale should not be taken lightly.

It might be said that achieving
some kind of consensus between Gulf states could be more testing than actually brokering a deal with Morocco.

The hope is that the potential business opportunities in the North African country that inclusion in the GCC could foster may be enough to bring all sides together. If there is a consensus, it’s unlikely to happen overnight.