Experts – What Caused The JLT Fire In Dubai? - Gulf Business 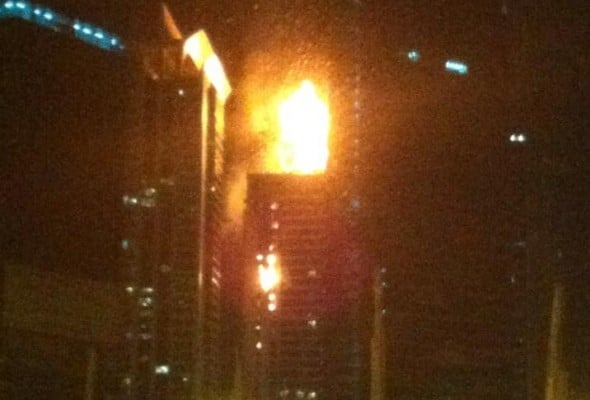 Authorities are still investigating the cause of a massive fire that destroyed a major part of the Tamweel building in Dubai’s Jumeirah Lake Towers (JLT) area earlier this week.

According to some media reports, faulty air-conditioning caused the accident, while others have blamed it on sub-standard cladding material.

“As is evident from the videos, the fire started at the roof of building, and that might have been due to a short-circuit or over heating of any of the equipments installed on the roof,” said Noman Qamar, project manager at fire protection company Aldes.

“The fire spread rapidly to other parts of the building mainly due to falling debris of the flammable cladding that was used on the tower, which is similar to other incidences that occurred in other residential towers),” he added.

In October this year, the 13-storey Saif Belhasa Building, a residential tower in Tecom, was badly damaged after a fire broke out on the fourth floor. Two people were reportedly killed in the blaze, which also completely destroyed nine flats.

Another residential building in Dubai Marina, the Sulafa Tower, was also damaged by a fire earlier this year.

“Such incidences can be minimised if the consultants and contractors follow the guidelines as laid out in the UAE Fire Code and other applicable international building codes regarding the design of fire protection system as well as selection of the fire safety products to be installed inside building,” said Qamar.

According to Qamar, contractors try to cut costs and don’t always ensure that they use safe and reliable materials.

“Safety of the occupants and the building should be the first priority while designing or selecting different materials and equipments rather than the cost. Developers should not compromise on the quality and reliability of the fire protection system as well as fire safety products,” he said.

“Selection of cheap products to minimise the installation cost of the project can actually lead to much higher costs in case of fire incidences,” he added.