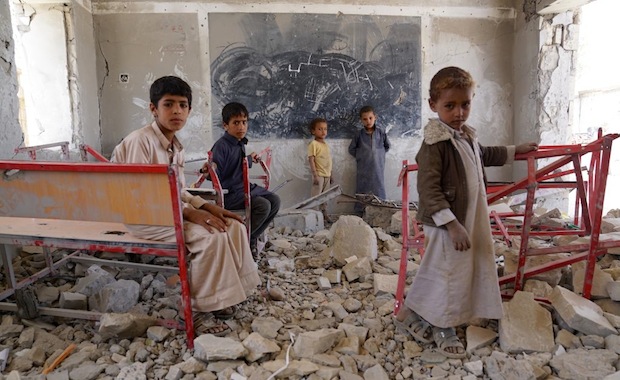 Saudi Arabia and its allies have “no ambitions” in Yemen, its ambassador to Yemen, Mohammed bin Saeed Al Jaber has said.

Speaking at a meeting in Washington DC, Al Jaber clarified that the kingdom’s aim was to ensure that “the Yemenis and the region enjoys security and stability”.

The war in Yemen was “not an option but a necessity in response to the demand of Yemeni legitimacy, to stop the Iranian intervention in Yemen and end its project to threaten the national security of the Gulf”, the official Saudi Press Agency (SPA) quoted Al Jaber as saying.

The kingdom and its allies were focussed on dismantling the armed militias and seeing the return of Yemen as an independent Arab state, he said.

Al Jaber also pointed out that Saudi and the Arab alliance countries have sought to find a political solution with the participation of all Yemeni parties.

A Saudi-led coalition of Arab countries has been fighting Houthi rebels and forces loyal to former Yemeni President Ali Abdullah Saleh in Yemen since March 2015, in a bid to restore President Abd-Rabbu Mansour Hadi to power.

The two-year conflict has killed more than 10,000 people and left millions displaced in Yemen, according to UN estimates.

Al Jaber insisted that the coalition countries have given the protection of civilians a “high priority” and have drawn up a list of thousands of civilian areas that are strictly prohibited from any attack.

“The coalition is fully committed to international humanitarian law and investigates any accusation against the alliance,” the report quoted him as saying.

Saudi and the Arab alliance countries have provided over $600m in humanitarian assistance to Yemen, Al Jaber added.

On Wednesday, Norwegian Refugee Council secretary general Jan Egeland, who visited Yemen, said that he was “shocked to his bones” by what he saw and heard in the country.

“The world is letting some seven million men, women and children slowly but surely, be engulfed by unprecedented famine. It is not a drought that is at fault. This preventable catastrophe is man-made from A to Z,” he said.

“This is a gigantic failure of international diplomacy. Men with guns and power inside Yemen as well as in regional and international capitals are undermining every effort to avert an entirely preventable famine, as well as the collapse of health and education services for millions of children,” he added.