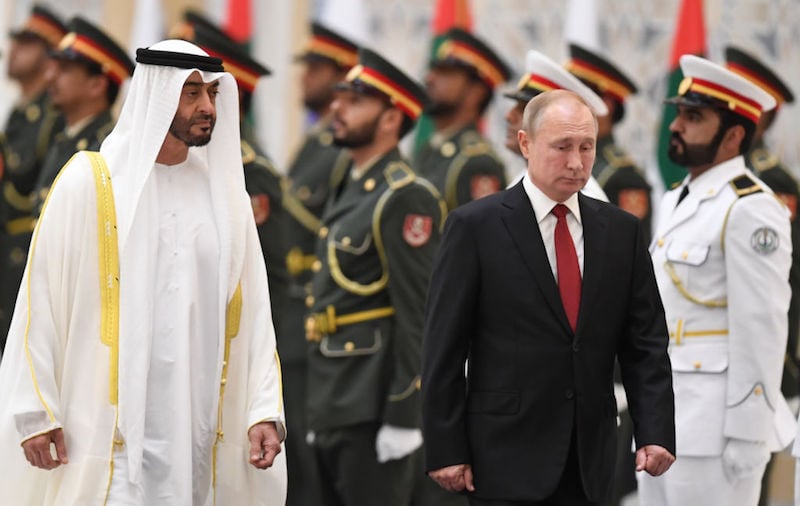 Russian President Vladimir Putin arrived in the UAE on Tuesday for his first official visit since 2007.

The two leaders are set to hold talks on improving bilateral ties and regional and international developments.

I welcome President Vladimir Putin as an honoured guest to the UAE. This historic visit reflects the strength of UAE-Russia relations, which we will continue to jointly promote at all levels for the mutual benefit of our nations. pic.twitter.com/tFVGXuzKsC

Ahead of his visit, Putin called the UAE as a “close and promising partner”.

Trade between Russia and the UAE stands at $1.7bn, but plans are underway to further boost relations, Putin told official news news agency WAM earlier this week. “This is not enough, we are well aware of that, so currently, we are working with the UAE’s sovereign fund,” he said.

According to Russia’s sovereign wealth fund, the two countries are expected to sign 10 investment deals worth more than $1bn during the visit.

“We are cooperating to ensure stability in the region and working together to counter and confront all forms of the extremist ideology,” Sheikh Abdullah said.

The two countries are improving bilateral relations in the areas of trade, tourism, military cooperation and space sciences, he explained.

On energy market, Sheikh Abdullah said: “The UAE and Russia have over the recent years co-operated to maintain the balance in the world oil markets and tackle imbalances in supply and demand fluctuations to ensure the aspired balance and stability in the markets.”

The minister also highlighted increased tourism between the UAE and Russia following the mutual entry visa waiver agreement. Russian arrivals to the UEA have risen from 580,000 to nearly one million, while the number of UAE tourists to Russia has also grown by 58 per cent, he added.