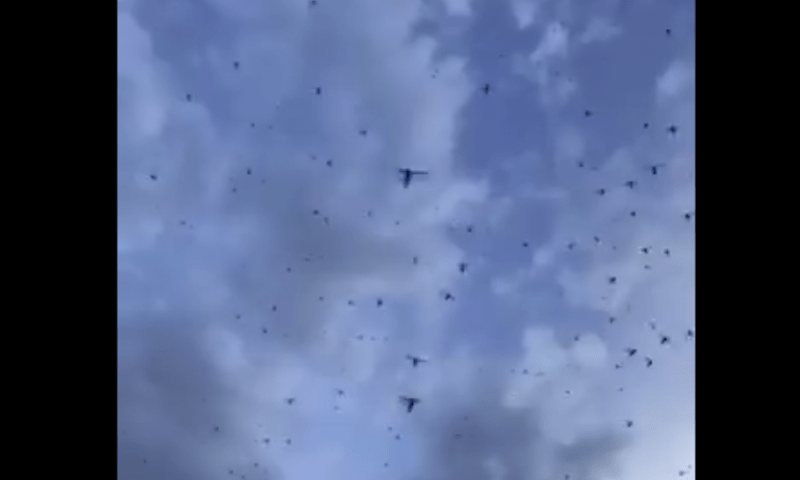 Swarms of locusts descended on the Saudi city of Najran last week, with similar infestations expected to continue over the next two months.

Videos shared on social media by the Najran residents showed the skies darkened by millions of the insects.

Footage also showed thousands of locusts clinging to trees in the city.

The municipality has deployed workers to fumigate the streets to rid the city of the insects.

Saudi Arabia has seen an outbreak of locusts and black crickets intermittently since the start of this year after the insects moved from Eritrea and Sudan along both sides of the Red Sea to Saudi and Egypt.

“Good rains along the Red Sea coastal plains in Eritrea and Sudan have allowed two generations of breeding since October, leading to a substantial increase in locust populations and the formation of highly mobile swarms,” the UN Food and Agriculture Organization said in February.

At least one swarm had crossed to the northern coast of Saudi Arabia in mid-January, it said.

Images circulated in January showed swarms of black crickets covering the Grand Mosque in Saudi’s Makkah. They were later cleared up through fumigation.

Read: Makkah clears up swarms of black crickets at the Grand Mosque, across the city

In April, the insects descended on the city of Madinah, and the municipality engaged hundreds of workers to clear them off the streets.

Saudi’s ministry of Environment has warned that the locust swarms are expected to continue to invade the kingdom for two months. It also urged citizens and residents not to eat locusts because they were contaminated by toxic pesticides.

Adult locust swarms can fly up to 150 km a day with the wind and adult insects can consume roughly their own weight in fresh food per day.