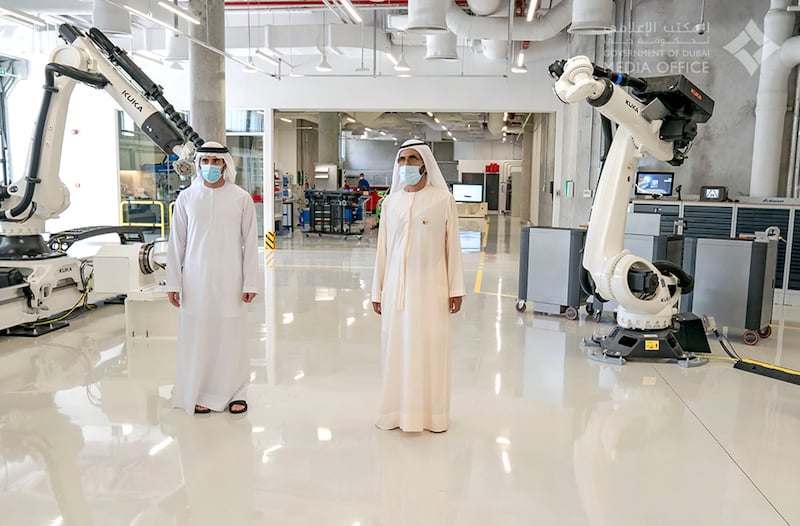 Sheikh Mohammed bin Rashid Al Maktoum, Vice President and Prime Minister of the UAE and Ruler of Dubai, visited the Dubai Future Labs (DFL) to inaugurate it on Monday.

“Today, we have launched Dubai Future Labs as part of our belief in the importance of investing in the applied R&D sector in Dubai and the UAE. The labs are specialised in future tech R&D will build national capacities and shape solutions in Fourth Industrial Revolution sectors such as robotics, AI, and automation,” tweeted Sheikh Mohammed.

.@HHShkMohd, accompanied by @HamdanMohammed and @HHAhmedBinSaeed, inaugurates #Dubai Future Labs, the region’s first-of-its-kind lab in the fields of research, testing and applications of future technology, as well as being a global incubator to test modern innovations. pic.twitter.com/hWsFAMYbJX

DFL, which will operate under the supervision of Dubai Future Foundation, will partner with global R&D institutions and is mandated to connect industries and relevant stakeholders by facilitating technology transfers.

It will also serve as a platform to attract subject experts to AREA 2071 in Dubai Future District.

Sheikh Mohammed directed the teams at the Dubai Future Labs to collaborate and coordinate with local and international laboratories, research centres and universities.

The projects include DFL’s recent ventilator model, M061, and also its first commercial drones and autonomous ground vehicles deployed in the logistics sector.

The project team plans to execute a rigorous testing cycle of the ventilator in collaboration with respiratory specialists and clinicians in Dubai’s hospitals to ensure that the ventilator system complies with required standards and meets international requirements, reported news agency WAM.

Trials will be conducted on patients once testing has been carried out to ensure safe deployment.

Sheikh Mohammed also viewed an innovative project in the AI and autonomous vehicles sector that is currently being developed in cooperation between the UAE AI Office, the Dubai Future Labs, and AutoX, a  company specialised in developing the future-oriented transportation technologies, and which uses AI to develop self-driving vehicle technology.

Phase one of the delivery services sector solutions project includes building a prototype of the product, defining the customer requirements for deliveries, reviewing the regulatory frameworks for aerial traffic, as well as defining the technical specifications for the delivery ecosystem for drones.

The DFL team will conduct experimental tours to collect data on the take-off, delivery, and movement processes. It will also utilise client feedback and evaluations of the pilot stage and analyse this information to generate ideas on providing best-in-class future services and applications that comply with the highest safety standards.

It will also involve real-life testing of drone delivery in a semi-controlled environment, a review of other autonomous delivery options, and a collection of data necessary to transition to the next stage that will focus on building commercially scalable solutions.

During his visit, Sheikh Mohammed also met a number of national service members that are assigned to the advanced electronics programme.

That programme is a collaboration between the National Service Authority at the General Headquarter of UAE Armed Forces, the National Program For Artificial Intelligence and the Dubai Future Foundation.