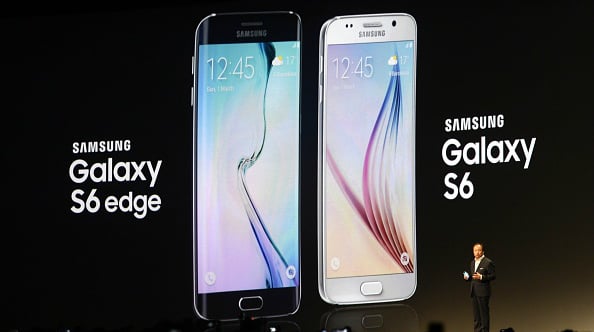 The S6 utilises a flat display, metal frame and glass front and back panels, while the S6 Edge (video) is similarly constructed only with curved edges on the left and right of the display, similar to the technology seen on last year’s Note Edge.

In a quick hands on at MWC the difference between this year’s Samsung devices and last year’s S5 was clear, with the choice of materials making for a far more premium fee in the hand.

The quad HD display, with 577 PPI was a particular highlight, although I was left wondering how much this would drain the battery with extended use.

Samsung’s Touchwiz version of Android has also been noticeably toned down, with far less bloatware than seen with the S4 and S5, which will be welcomed by some.

The removal of key features, including expandable storage via micro SD, waterproofing and the ability to remove the battery could receive a colder reception, however.

In comparison presentations at the event Samsung placed particular focus on the S6 camera, highlighting its performance compared to Apple’s iPhone 6, it’s speed of activation and a variety of new features including infrared white balance detection.

The front 16MP and rear 5MP shooters performed well in brief testing, with the camera activation time particularly noticeable, although getting a genuine grasp of overall performance in different conditions was difficult under conference lighting.