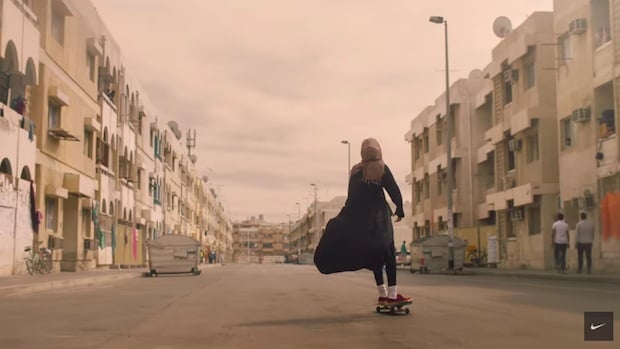 An online commercial released by Nike this week showing Arab women fencing, boxing and spinning on ice-skates has stirred controversy over its attempt to smash stereotypes about women leading home-bound lives in the conservative region.

It begins with a woman nervously peering out of her doorway and adjusting her veil before going for a run in the street, while a female voice narrates in a Saudi dialect: “What will they say about you? Maybe they’ll say you exceeded all expectations.”

“An ad (which) touches on the insecurities of women in a society digs deeper and becomes an empowerment tool rather than just a product,” Sara al-Zawqari, a spokeswoman for the International Red Cross in Iraq, wrote on her Twitter page.

But not all the reviews were positive.

“I think this ad was an utter fail,” said Nada Sahimi on the company’s Instagram page.

“This is not the true representation of Arab, Muslim women. We do not wear a hijab and go running in the streets, shame on Nike,” she said.

Filmed in the older, rundown suburbs of the glitzy Gulf Arab emirate of Dubai, the ad reflects the struggles faced not only by women across the region but also by some its own stars.

Amal Mourad, a 24-year old Emirati parkour athlete shown leaping across rooftops, told Reuters her father was reluctant at first to let her train in a gym where men were present.

“Convincing my father was the toughest part … if you want something bad enough you stick to it, and you can get it done,” said Mourad, who now teaches classes in a mixed gender gym.

Women exercising in public is a rare sight in much of the region and women-only gyms are few, are not fully equipped for different sports and are often more expensive than gyms for men.

In Saudi Arabia, physical education is prohibited in all-girls public schools and women’s gyms remain illegal in the kingdom because female athleticism is deemed un-Islamic.

“It is not my role to convince the society, but my role is limited to opening the doors for our girls to live a healthy lifestyle,” said bint Bandar, who is a senior official at the General Authority of Sports.

The ad’s message may also tap into an emerging new market for Arab women chafing at hidebound social norms and an entertainment industry that often relegates them to docile roles.

“We need to start driving the conversation away from Arab women being subjects of segregation, or oppression … and more towards them being enablers, achievers and go-getters,” said Dubai advertising executive Nadim Ghassan.