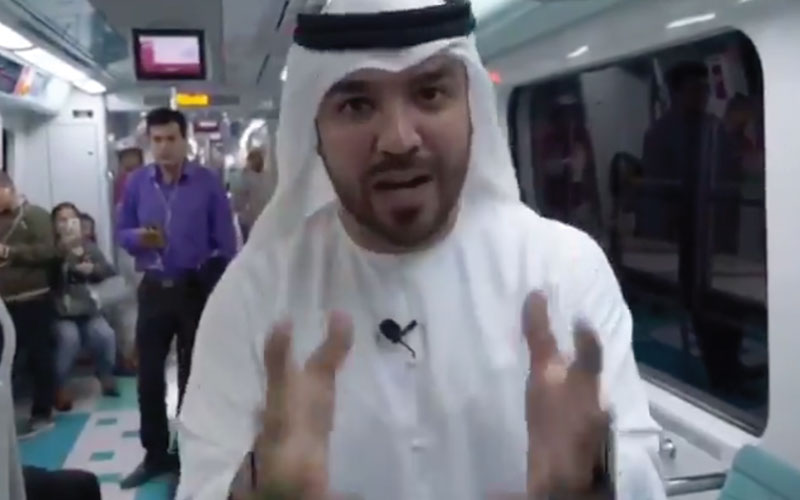 There are reportedly around 650,000 daily metro users in Dubai.

Read: 594 million use public and shared transport in Dubai in 2019

In 2019, a total of 594 million riders in Dubai used public and shared transport.

Of those, 202.98 million riders used the Dubai Metro’s Red and Green Lines.

Approximately 650,000 people commute onboard #DubaiMetro every day, How does one of the world’s busiest metros maintain the right cleanliness? Khalid Al Ameri went behind the scene to discover the dream team that makes this happen.#RTA #HealthAndSafety pic.twitter.com/CttSHxMID5

The video which comes at a time when the coronavirus Covid-19 has spread to countries across the world, shows Al Ameri explaining how the metro personnel disinfect the train at the end of each journey at the terminal points at either ends of the metro lines.

After every journey when the train reaches the terminal stations, and several times a day, a team of cleaners wipe down the surfaces including the grab-handles and stanchions, besides spraying the seats with disinfectants.

At the various metro stations, there are separate teams of cleaners who clean and disinfect surfaces where multiple people are likely to make physical contact with such as the ticket vending machines.

Apart from the daily multiple cleanup operations in every metro station and train, there is an additional deep cleaning of every train that takes place when the train is not in service.

It includes a thorough cleaning of its interiors and the exterior surface.

A recent video by Dubai’s Emirates airline also showed how it had intensified the disinfection of all cabins as a precaution against the Covid-19 outbreak.