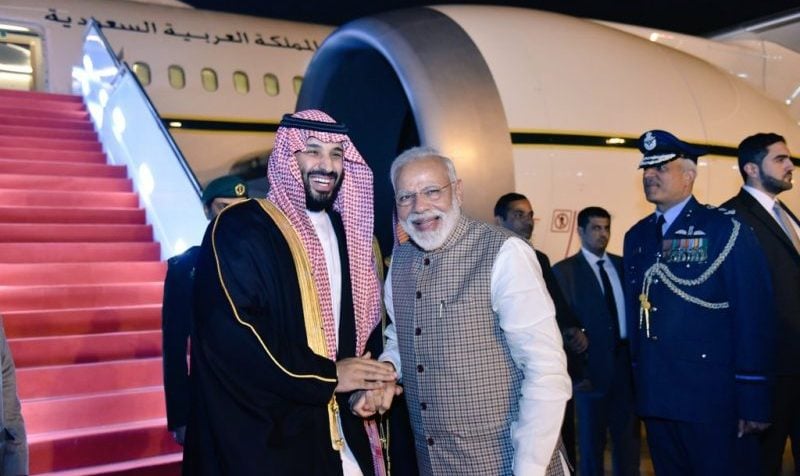 Ordinarily, the prime minister would not receive a foreign dignitary at the airport, but instead send an official or a junior government minister.

“A new chapter in bilateral relations,” Raveesh Kumar, spokesman for the Foreign Ministry, posted on Twitter, hailing Modi “breaking protocol” with a photograph of the pair warmly clasping hands by the steps of the prince’s plane.

Modi is due to hold talks on Wednesday with the crown prince, who has already visited Pakistan, where he also received a lavish reception.

The trip has taken on extra dimension after a bombing in the disputed Kashmir region on Thursday that India blamed on Pakistan. The neighbours are each keen to cement ties with Saudi Arabia even as tensions between them have risen sharply.

Saudi Arabia is India’s top supplier of crude oil but the two countries have expanded ties beyond energy, and their governments have agreed to build a strategic partnership, India’s Foreign Ministry said last week.

During the trip, India is expecting the crown prince to announce an initial investment in its National Investment and Infrastructure Fund, a quasi-sovereign wealth fund, to help accelerate the building of ports and highways, an Indian official and Saudi state media has said.

He is also due to visit China, Malaysia and Indonesia during the tour that is his first through the region.

New Delhi has accused Pakistan of having a hand in the bombing and vowed to punish Islamabad, which denies involvement.

During his visit to Pakistan, the crown prince said Saudi Arabia had signed investment agreements worth $20 billion.