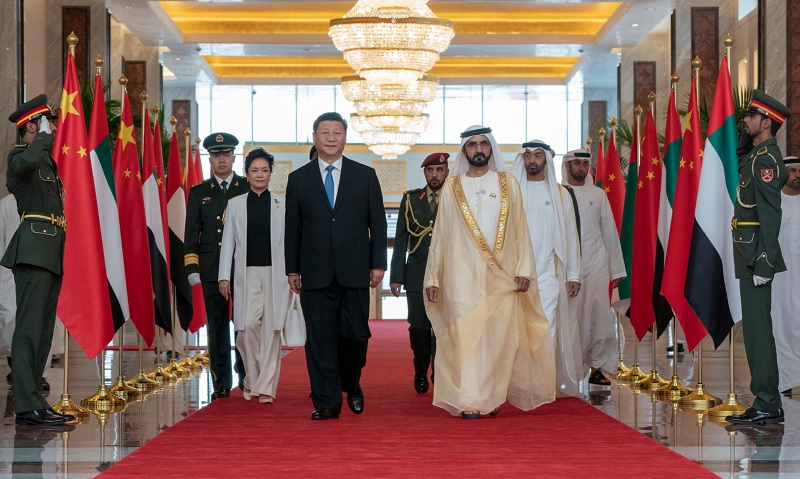 Chinese President Xi Jinping arrived in the UAE on Thursday evening for a three-day state visit.

The President, who is accompanied by his wife Peng Liyuan, is on his first international state visit since he was re-elected in March this year.

The UAE sent 12 F-16s and Mirage aircraft to escort Jinping’s presidential plane after it entered the country’s airspace.

Chinese President #XiJinping arrived in the United Arab Emirates (UAE) on Thursday at the start of a state visit to the Gulf nation. The UAE dispatched fighter jets to escort the Xi’s plane as soon as it entered the country’s airspace. #BRICS2018 pic.twitter.com/oU20Ac6MHx

Abu Dhabi’s sky was also illuminated with fireworks to mark his arrival, and flags belonging to both countries have been displayed.

Jinping was accorded an official reception ceremony at the airport where the Chinese national anthem was played and 21 artillery rounds fired. A group of honour guards lined up in reception to greet him. 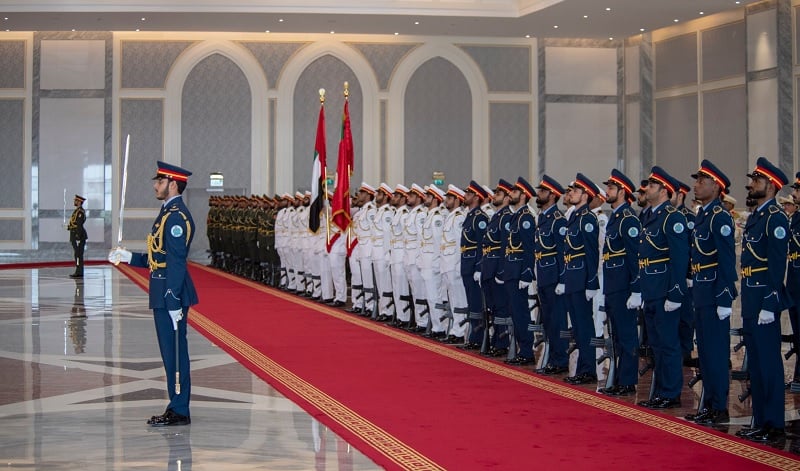 Sheikh Mohammed bin Rashid said: “We appreciate the President’s choosing to visit the UAE on his first foreign tour after his recent re-election for a new presidential term, which reflects the weight of our strategic partnership and underscores the depth of the ties between the two sides.”

He also highlighted the strong economic relations and trade exchanges between the two countries.

The UAE’s trade with China accounted for about a quarter of the total Chinese-Arab trade volume in 2017, reaching Dhs170bn.

Sheikh Mohammed bin Rashid also noted that more than one million Chinese visited the UAE during the past year.

He said that economic cooperation had expanded to include many sectors such as oil, renewable energy, infrastructure and advanced technology, with the UAE-China partnerships valued at tens of billions of dirhams.

“We seek to establish cultural, humanitarian and people-to-people relations in addition to our strong economic and political relations,” he added.

Sheikh Mohamed bin Zayed Al Nahyan also stressed that efforts are focusing on opening new horizons of coordination and integration between the UAE and China.

He said that bilateral relations were not just limited to political and economic issues, but extended to cultural, social and educational aspects as well.

To coincide with Jinping’s visit, the UAE also launched the UAE-China Week from July 17 to 24, aimed at enhancing trade cooperation and cultural exchange between the two countries.

During his visit, Xi will hold a series of high-level meetings aimed at strengthening ties between the two countries.

An economic forum will also be held in Abu Dhabi on Friday evening, which will be attended by the UAE’s economy minister Sultan Bin Saeed Al Mansouri and his Chinese counterpart Zhong Shan.