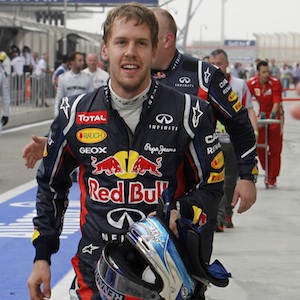 Formula One world champion Sebastian Vettel won the Grand Prix in Bahrain on Sunday while rage boiled beyond the circuit among protesters who say the island’s rulers should not have hosted the race after crushing Arab Spring demonstrations last year.

High security kept trouble well away from the track, where Red Bull’s Vettel led an uneventful race before half-empty stands.

The villages have seen nightly clashes over the past week.

Pro-democracy protesters said the global spotlight they have attracted due to the Grand Prix showed the Sunni-led authorities’ determination to go ahead with the competition this year was a mistake.

“They miscalculated. They thought cancelling the race would be a defeat for them but they didn’t realise the cost of holding the race,” Shi’ite activist Alaa Shehabi said by telephone.

Later on Sunday, Shehabi tweeted that she was about to be arrested in Budaiya, where tyres were burning after a mass protest on Friday. Calls to her phone were not answered.

The luxury sporting event was the government’s chance to show life was back to normal in the kingdom after security concerns over anti-government demonstrations forced last year’s race to be delayed, then cancelled.

But many of seats in the grandstand and other areas were empty – d espite lavish entertainment at the event to attract punters. Officials put spectator numbers at 28,000 in a circuit that can hold 45,000.

Some teams expressed frustration at the attention on politics. Vettel said shortly after arrival on Thursday that he thought much of what was being reported was hype and wanted to focus on “stuff that really matters – tyre temperatures, cars”.

After the race, he appeared relieved. “It was a difficult race, extremely tough,” said the 24-year-old German, who closed his eyes and took a deep breath as he stood on the podium. Finland’s Kimi Raikkonen was second for Lotus with French team mate Romain Grosjean in third place.

Rights activist Sayed Yousif al-Muhafda said police used teargas to stop demonstrations in several Shi’ite villages around Manama after the race. A team working for Britain’s Channel 4 television was arrested and their diver was assaulted by police and separated from them, the station said.

Thousands of people took to the streets in the villages at the weekend and demonstrators hurled petrol bombs at security forces who responded with teargas, rubber bullets and birdshot.

Crown Prince Sheikh Salman bin Hamad al-Khalifa, who brought the race to the country in 2004, securing the first Formula One event in the region, smiled and shook hands with other spectators at the finish.

A protester was found dead on Saturday after what opposition activists said was a police beating, infuriating the Shi’ite Muslim majority, which complains of marginalisation by the Sunni ruling family and brutality since last year’s crackdown.

The funeral of Salah Abbas Habib, 36, could set the stage for more riots, but it was not clear when it would be as authorities have sometimes held on to bodies for days or weeks.

Formula One and Bahraini officials have dismissed suggestions the race should not have been held and for those inside the Bahrain International Circuit, the unrest had little impact, though the highway to it was lined with police cars.

The race is sponsored by a string of global brands. Thomson Reuters, parent company of Reuters, is a sponsor of the Williams Formula One team.

Vodafone, which sponsors the McLaren team of leading British drivers Lewis Hamilton and Jenson Button, was one of the few sponsors to comment on the event, saying it had not offered any hospitality or sent employees and had reiterated its concerns to McLaren. The decision to proceed lay with the teams and Formula One, not the sponsors, it said.

Bahrain, a close military ally of the United States, is the only one of the Gulf monarchies to have been seriously threatened by Arab Spring protests that brought down the rulers of Tunisia, Egypt, Libya and Yemen since the start of 2011.

Its government crushed protests last year, swept demonstrators off the streets and bulldozed the traffic circle where they had camped. Thirty-five people, including security forces, died in that crackdown. Since then, Shi’ite areas have remained volatile and clashes have increased in recent months.

The Bahrain government commissioned an independent inquiry after last year’s crackdown and says it is enacting reforms. Human rights groups say it is moving too slowly.

King Hamad bin Isa al-Khalifa, who attended the Grand Prix, said he wanted “to make clear my personal commitment to reform and reconciliation in our great country. The door is always open for sincere dialogue amongst all our people.”

Protests peaked on Friday, usually a day of protest in the Arab world that falls on the weekend, when over 10,000 rallied. An estimated 7,000 gathered on Saturday but there were no signs of mass gatherings on Sunday, a regular workday.

Activist Muhafda said authorities did not want the funeral for Habib to take place while many foreign journalists were still in the country for Formula One.

Staff of two teams witnessed petrol bomb-throwing incidents and some members of the Force India team left Bahrain. But most of the travelling Formula One entourage have had no interaction with the violence taking place mainly outside the capital.

Bahrain’s government is thought to have paid $40 million to host the event, a symbol of pride for the ruling family. When it was last held in 2010, the race drew more than 100,000 visitors and generated $500 million in spending.

While motor sports journalists were invited to cover it, reporters from Reuters and some other news organisations who normally write about Middle East politics were denied visas. Channel 4 said its team had been working without accreditation.

Hackers brought down the F1 website intermittently on Friday and defaced another site, f1-racers.net, to support what they described as the Bahraini people’s struggle against oppression.

The F1 website was back up on Sunday and Formula One chief Bernie Ecclestone told Reuters he did not think the violence would damage the future of motorsport in the Middle East.

“You know what they say – there is no such thing as bad publicity,” he said.