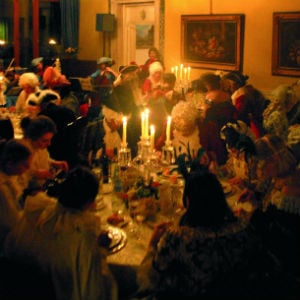 My wife came rushing in. “Come on! Come on! There are people in costume.”

We had spent a rather damp Saturday morning shopping in Venice and returned to have lunch on our hotel’s terrace with its view over the Grand Canal. So far Venice had seemed very much its usual splendid self, apart from a stage that had been set up Piazza San Marco. Now, however, people were appearing on the streets in carnival costume and Kate was keen to join in.

My own outfit was pretty straight forward, an 18th-century gentleman’s frock coat and knee breeches, worn with a tricorn hat and a large white “bauta” mask. Kate’s was more complex. As her dress required panniers that effectively tripled the width of her hips, she had to learn to step sideways into the lift.

We’d been to the world-famous Carnevale before, but only as spectators. It was finding that our local fancy dress shop in Oxford did a very good line in period costume that gave us the idea to take part. This way we didn’t have to pay Venetian hire-prices to be part of the fun.

As soon as we emerged like Mr & Mrs Casanova out for a stroll, we attracted a lot of attention. As we crossed the San Moise bridge people stared and photographed us. One woman came alongside to take our picture, but we kept on moving so she gave up. We felt we’d let her down. I noticed other costumed revellers paused whenever a photographer drew near so we did the same. Noblesse oblige. Passing Caffe Florian, one tourist thanked us for posing and Kate replied “You’re welcome”. The poor man looked quite disappointed. I think he imagined we were real Venetians. Thereafter we just inclined our heads silently, yet graciously, whenever people got out their cameras.

At the Hotel Danieli we’d bought tickets for hot chocolate and music in the hotel’s glorious Byzantine lobby. We found a sofa wide enough for Kate and talked to other guests, who included a nurse from New York who had come dressed as a courtesan, some Japanese Don Giovannis and a middle-aged Londoner who was dressed as the Doge of Venice.

Later we walked to the Luna Baglioni which, like many hotels during Carnevale, was hosting a dinner and a performance. We were treated to an Italian parody of il Trovatore, while in the lobby acrobats on stilts ushered guests up to the Marco Polo Ballroom, which is famous for its stunning floor to ceiling frescoes by students of Giambattista Tiepolo. Looking around this salon lit entirely by candlelight, it was so easy to believe we were back in the 18th
century – until everyone got out their cameras!