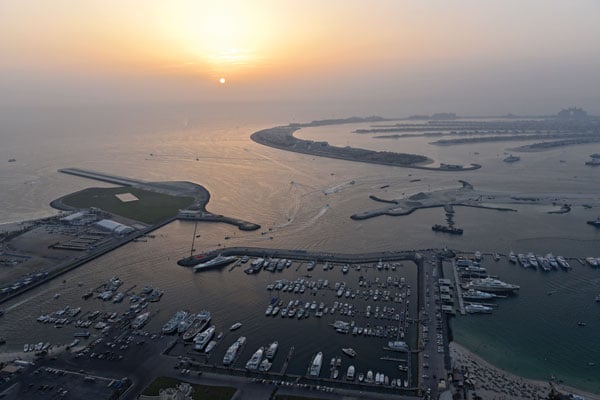 In an era where almost anything seems possible we seem to be faced with two unique issues, each of which are moving in diverging directions.

The first is due to the effects of climate change which are forcing people to have to move away from the sea – either because their homes are flooded or the local agriculture can no longer sustain the population. The second concerns people who are living on land being built into the sea – a process called land reclamation.

It is a unique paradox and delving into both occurrences provides some interesting insights into both the true cost and the value of land.

A number of countries have already been affected by the effects of climate change, such as the island nation of Kiribati which is seeing the sea surrounding its coastline rise four times faster than the global average. In 2014, the Kiribati government sought approval to purchase a Fijian island for $8.8m in order to permanently relocate its citizens.

Estimates predict that by 2050, 700 million people from large countries such as Bangladesh and favored destination spots such as the Seychelles and the Maldives, amongst others, could be displaced due to the effects from climate change. This reality begs a lot of tough questions such as will they be able to seek asylum in other countries? Will their governments be able to find an alternative place for everyone to live? Are they just expected to perish?

While many are finding their homes subsumed by water, others are extending land and therefore new properties into the sea. This is done either to increase the value of real estate, which is a prominent practice in Dubai and Malaysia, or to otherwise increase their land mass should they inhabit a small place, such as Singapore – one of the world’s most densely populated areas.

Then there are the Dubai projects such as the World Islands – a global atlas depicted through sand splayed out in the Gulf – and the Palm Jumeirah, luxury residences that have no real predecessors.

While these projects literally put Dubai on the map in terms of global prime real estate, Dubai has a larger problem when it comes to space. As the most populous emirate, Dubai’s land mass pales in comparison to the capital, Abu Dhabi, which covers 67,340 square kilometers or 81 per cent of the United Arab Emirates’ total land mass. Dubai covers 4,415 square kilometers, or just five percent of the country’s total land mass, accord to the official UAE Government Portal. Dubai’s population is comprised of around three million people, alongside another three million in Abu Dhabi. However, lack of space is not the prevailing reason behind land reclamation projects.

Considering that, a growing population in Dubai does not technically necessitate land reclamation projects in order to provide habitable living spaces. Competing with the likes of Paris, London or New York for tourists and well-heeled home buyers who demand beach-front properties, however, does.

Dubai’s natural coastline is only 40 kilometers long, but with the aspiration to be the best of the best, Dubai has simply built more waterfront land. In Vince Beiser’s The World in a Grain the author has devoted an entire chapter to land reclamation. He noted that projects built out of reclaimed land such as The World Islands have asking prices of around $13m per property with a total estimated cost of $14bn.

Whatever the strategy, it has worked. As noted in reports by Knight Frank and Savills, Dubai has ranked amongst the world’s top cities for prime real estate for a handful of years now. These achievements can be attributed to not only the speed with which Dubai real estate has made its mark, but the depth of offering that is available.

According to Property Finder Research & Data, there are currently 16,653 residential units under construction in Dubai that are on or near a body of water, whether it is the Gulf or a man-made body further inland. On average, the current price for a three-bedroom waterfront property in Dubai Marina is currently Dhs2.2m, Dhs2.5m on the Palm Jumeirah and Dhs15.6m in The World Islands.

In order to put this into context, the average price of a three-bedroom property in Dubai – comparable in terms of quality and size but not considered a waterfront property – would be Dhs4.1m in Downtown Dubai, Dhs4.2m in DIFC, Dhs2.4m in parts of Arabian Ranches, Dhs2min The Springs and Dhs1.3m in Town Square.

It is more difficult to see a correlation in terms of a property being on the water and that feature causing intrinsically more value in Dubai, compared to the examples given for waterfront versus non-waterfront property in the US. It seems that brand of developer, size of the property, and perhaps how rare the type of development is, for instance with the World Islands, tends to lend more value.

In neighboring Abu Dhabi, 19,520 residential waterfront properties are currently under construction. A three-bedroom property on Al Reem Island in Abu Dhabi has an average price of Dhs2m, Dhs3.1m on Yas Island and Dhs3m for the same on Saadiyat Island. Properties on Zaya Nurai Island are valued between Dhs12.28m and could be as much as Dhs45m, according to Property Finder Data & Research, 2019.

Considering the natural geographic makeup of Abu Dhabi, it has over 700 square kilometers of coast line and 200 natural islands (Official UAE Government Portal, 2019). However, property development has moved inland and in communities such as Khalifa City, properties that are similar in size and quality, but are not waterfront are valued at Dhs3.9m. Similar to Dubai, having a view of the water from your home does not automatically raise the value of your property and other factors must be at play.

While properties within projects built on reclaimed land do not necessarily exhibit greater values versus homes not situated near water, it would be fair to say that the value of Dubai’s real estate overall has increased due to the popularity of these projects and the ability for Dubai to always reinvent the wheel.

Carla Issa is a senior research analyst at Property Finder