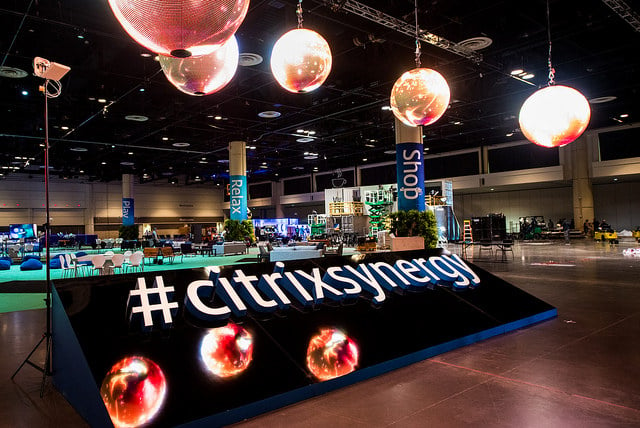 As the lights dimmed, gigantic screens lit up and music blared out in the auditorium to a huge crowd of audience consisting of Citrix employees, clients, analysts and press. This was how Synergy, an annual event held by United States- headquartered company Citrix to showcase its latest products, opened in Orlando this year.

Emerging onto the stage amidst the sliding screens, chief executive officer and president Mark Templeton congratulated the team for putting together the “largest Synergy ever”.

But the opulence of the event belied the tough steps that the company had undergone a few months prior in order to maintain its position.

Valued at nearly $3bn, Citrix is no small player in a software industry looking to tap into the shifting nature of the workplace. It has made a name for itself in desktop virtualisation (a service that allows employees to access their office desktop from other devices), cloud services and mobility apps such as GoToMeeting that simplify virtual meetings.

But having such a varied mix has also exerted pressure on the company as it looks to compete with the likes of VMware and Cisco in a number of areas.

The software firm posted mixed first quarter results, closing around 39 deals worth $1m and above during the period but growing revenue by just 1.3 per cent to reach $761m.

Citrix’s sales have been growing but its share price has left investors dissatisfied with some calling for an overhaul of its business and the sale of certain product lines. Recently one of its shareholders Elliot Management sent a note to the company saying that it could improve its performance by selling underperforming products and spinning high value businesses.

“The problem that Citrix has is that they are underperforming. Their underperformance triggered the recent letter from Elliott Management Corporation to Citrix,” says Gartner analyst Paul DeBeasi.

Although no sale was imminent, the California-headquartered company went through a major restructuring earlier this year, cutting 900 staff. It has also dealt with the departure of a number of senior executives over the last year.

Synergy was therefore seen as an opportunity to turn over a new leaf with a new line of products to boost sales and breathe life into Citrix’s sagging share price.

Focus on cloud and security

As smart devices proliferate in today’s world, offices too are beginning to change – a trend that Citrix is focusing on.

“The reality is that the ever-changing consumer marketplace has come to define the technologies that people want to use at work – and rightfully so, since they offer significant enhancements to productivity and efficiency,” says Citrix CEO Templeton.

“We wanted to find a way to help businesses feed the wave of innovation versus having to react to it. By enabling on-demand IT for a workspace world, our customers can now deploy new resources in minutes and manage them with ease, no matter where it resides or what device people are using – all while enhancing security, user productivity and business agility.”

Security and cloud are clearly the buzzwords Citrix wants to emphasise in this new push. As Templeton phrases it, Citrix is focusing on ‘&’ – a strategy that highlights security and tries to unify it with a varied mix of products in order to be more appealing to customers and investors.

One of its new products previewed at the event, Citrix Workspace Cloud, is an example of the firm’s new direction, enabling employees to use apps and new devices within a more secure environment.

“We probably didn’t say security loud enough. We have provided security for years but never really emphasised it. It was always a second level benefit that would be mentioned,” says Corporate Solutions Marketing vice president David Moxey.

“We always had the concern if we wanted to position Citrix as a security company or one that supports secure services. We just have to say security a bit more now so that it could help customers understand.”

Some of the factors that have driven the company to pursue this ‘&’ strategy are the consumerisation of technology and bring-your-own-device trends.

“It is not new but it is something that has really had an impact. Everybody wants to do BYOD but not everyone knows how. They have probably done it in pockets but it is still a massive push to widen its reach. It actually drives a lot of our core business.”

Gartner’s DeBeasi says that the company’s continued investment into its core products could help make it more successful. Citrix’s new features such as workspace cloud and dynamic containerisation – a service that allows an administrator to manage nearly three million
mobile apps – may improve its performance.

“We are seeing a lot of customers who engage in full-fledged mobility and not just users being able to access email. Users are able to do anything from any device from any network,” says regional sales director Kenan Abou Lteif.

The Middle East market has big potential he says: “We have experienced massive growth over the last few years. Traditionally we have been growing double digits in virtualisation with desktop virtualisation growing the fastest.

“Geographically we continue to see the United Arab Emirates and Saudi Arabia as the main growth engines for us. We also started expanding in countries such as Qatar and Kuwait.”

But despite the changing technology landscape in the region, Lteif feels that the lack of talent to manage complex information technology solutions is holding back the use of new products.

“So many organisations are still struggling to manage end user computing. People have got accustomed to some IT procedures taking time but, with solutions like workspace cloud, it has been simplified. Even BYOD has not picked up in the Middle East so much as they need to build many processes around it.”

Lteif says the situation is changing, however, with the region rapidly adopting smart trends thanks to its tech-savvy population.

“In a couple of years, people will begin bringing in wearables and various devices. There is a new generation that comes to the workforce and they are so tech- savvy and want to play around with the technology. Then more complex mobility and cloud solutions will be in demand.”

Even as Citrix forges ahead with its global and regional plans in cloud and mobility, its success may only be gauged when it hosts its next event in Las Vegas in 2016. With an ever-changing tech environment, the company has a significant task on its hands.