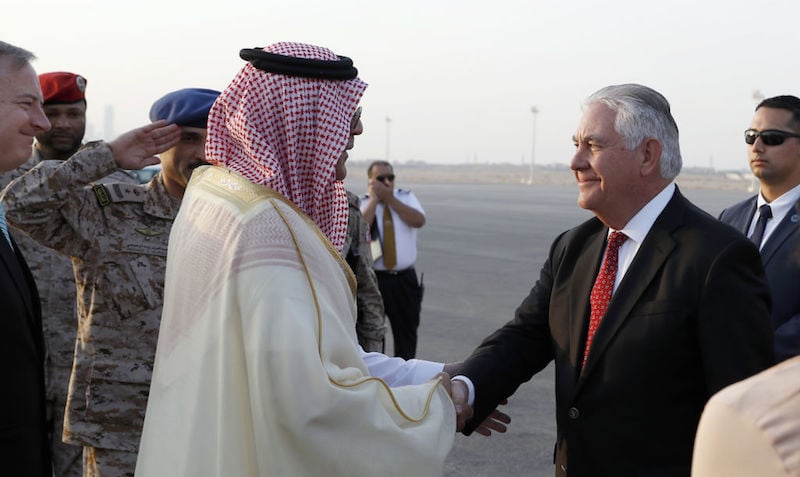 U.S. Secretary of State Rex Tillerson arrived in Riyadh on Saturday to attend a landmark meeting between officials from Saudi Arabia and Iraq aimed at improving relations between the two countries and countering Iran’s growing regional influence.

The chief U.S. diplomat flew into King Salman Air Base a little more than a week after U.S. President Donald Trump unveiled a strategy to contain Iran and compel Tehran to agree to close what he charged are flaws in the multinational 2015 deal designed to prevent Iran developing nuclear weapons.

Tillerson’s only official meeting on Saturday was a working dinner with Saudi Foreign Minister Adel al-Jubeir. He was stopping in Saudi Arabia on the first leg of a six-day trip that will also take him to Qatar, Pakistan, India and Switzerland.

His talks in Sunni Muslim-ruled Saudi Arabia and in Qatar were expected to be dominated by the topic of Shi’ite-dominated Iran’s growing regional influence.

Iran-backed militias have helped turn the tide of Syria’s civil war in the government’s favour and they have played leading roles in Iraq’s battle to recapture Islamic State’s self-declared “caliphate.”

This week they aided Iraqi security forces in seizing the oil-rich area of the northern city of Kirkuk as part of an effort to crush a bid for independence made by the Kurdish minority.

Washington and Riyadh also allege that Iran is supporting Houthi rebels in Yemen against pro-government forces that are supported by a Saudi-led military coalition backed by the United States. Yemen’s grinding civil war was expected to be high on Tillerson’s agenda.

On Sunday Tillerson is due to attend the inaugural session of the Saudi-Iraqi Coordination Council, a body whose creation was promoted by the Trump administration to improve relations between Saudi Arabia, Iran’s main regional rival, and Iraq, whose majority Shi’ite-dominated government has close ties with Tehran.

During his visit Tillerson is also expected to explore the possibility of renewing a push to end a diplomatic and economic boycott of Qatar by Saudi Arabia and other U.S. Arab allies, although he has conceded he is not optimistic.

In an interview on Thursday with Bloomberg, Tillerson blamed Saudi Arabia, the United Arab Emirates, Bahrain and Egypt for the lack of progress toward ending the four-month-old crisis.

Saudi Arabia and its allies have accused Qatar of supporting hardline Islamist groups and cosying up to Iran at the region’s expense. Doha denies the allegations.

“It’s up to the leadership of the quartet when they want to engage with Qatar because Qatar has been very clear – they are ready to engage,” said Tillerson, who forged close ties to the Gulf Arab countries in his former position as CEO of Exxon Mobil .

A senior UAE official said on Saturday it was up to Qatar to end the crisis ahead of a summit of the six-nation Gulf Cooperation Council in December.

“The ball is in its court and it is aware of what is required of it,” Minister of State for Foreign Affairs Anwar Gargash wrote on his Twitter account.