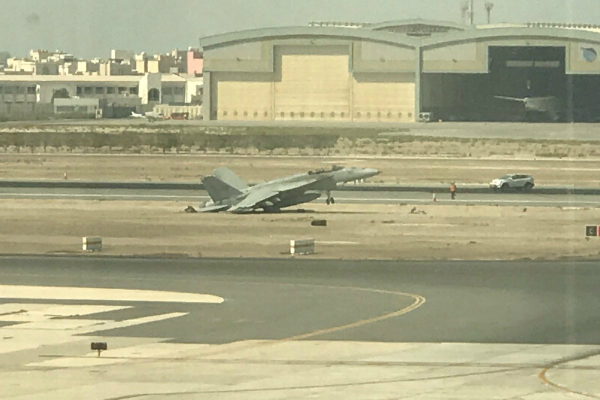 Bahrain said nine flights were diverted and one was cancelled on Saturday after the emergency landing of a United States F18 fighter jet at the country’s international airport.

The military jet was on a training mission in international waters when it suffered a technical problem in one engine and the pilot had to make an emergency landing at 12:40pm, according to the Ministry of Transportation and Telecommunications.

Commander Bill Urban, a spokesperson for the US Fifth Fleet, which is based in Bahrain, told the Associated Press that the plane took off from aircraft carrier USS Nimitz in the Arabian Gulf.

After suffering the engine malfunction it first tried to land at Sheikh Isa Air Base in Bahrain but later diverted to Bahrain International Airport (BIA).

“Due to the malfunction, the aircraft could not be stopped on the runway and the pilot ejected from the aircraft as it departed the runway,” Urban was quoted as saying.

Images posted on social media showed the aircraft mostly intact after landing off the left side of BIA’s runway 30.

Following the landing the runway was closed for all departing and incoming aircraft from 12:40pm to 2:50pm.

Services inside the airport continued as normal and the nine flights were diverted to Dammam, Dubai and Abu Dhabi airports.

Several departing aircraft were also delayed on top of the one cancellation.

The US Navy, which has 8,000 troops in Bahrain, is investigating the incident.