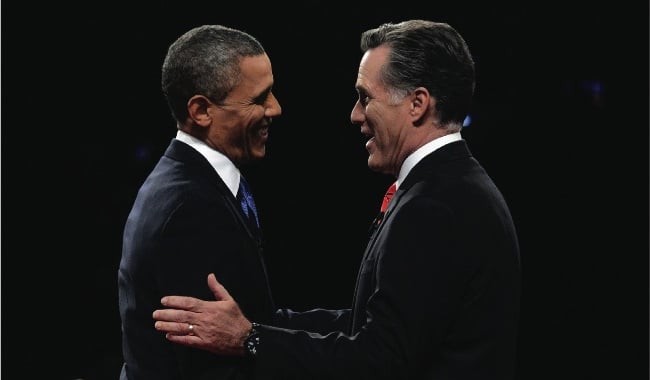 Personality and politics have rarely been seen apart in the run-up to the presidential election this month.

As is usually the case under the US system, personal attacks, publicity stunts and stage-managed TV debates are key battlegrounds. So whoever wins between Barack Obama and Mitt Romney on November 6 will have faced the most intense character health check.

But for leaders in government and business in the GCC the real issues trump the pettiness of the campaign.

According to experts, big questions around America’s future role in the world and how that will affect the Gulf are top priorities.

“GCC states have more structural concerns about the long-term impact of the decline of the US and rise of China as a partner in future,” said Jane Kinninmont, senior research fellow for Mena at Chatham House in London.

China’s growth will bear heavily on global oil demand and specifically the amount imported from the GCC. Saudi Arabia, the UAE, Kuwait and Qatar have been steadily increasing their exports to China, from $4.6 billion in 2011 to over $8 billion, according to
data earlier this year. This corresponds to a 68.8 per cent increase in how much China imported from the four GCC countries in just 12 months.

Meanwhile, a sharp cut in the US budget deficit after the polls could hurt a nascent recovery in the world’s biggest oil consumer. A Romney victory would see deep cuts in both taxes and spending and the repeal of Obama’s healthcare and financial services reforms. An Obama win might see a slower budget deficit reduction to stop debt growing faster than GDP.

Kinninmont adds: “Gulf leaders will be keeping a close eye on the outcome of this election, both personally and through their sovereign wealth funds, which are one of the world’s biggest investors in US treasury bills. They are very well informed and therefore will not be relying on the highly politicised discussions we’ve seen, especially in the media.”

There is certainly less optimism around change in this year’s contest compared to the Obama-Bush run-off in 2008.

Analysts say many in the Middle East are disappointed with Obama’s handling of events during the Arab Spring, particularly his withdrawal of support quite early on for Egypt’s toppled president Hosni Mubarak. At the same time few in the GCC could stomach Romney’s overwhelming display of support for Israel since he became the Republican candidate.

Apart from being a staunch Israel ally, the US’s role in the world seems to be changing. Domestically, it is getting harder for a US president to justify the costs of policing the world in the way it has in the past.

But this hasn’t concerned Romney, who looked to score political points recently by pledging to exert the US’s global influence through military and economic power in future. He argued Obama is failing to provide the global leadership needed and expected by the rest of the world, citing the handling of Syria and the recent protests and violence in Arab countries, including an attack on a US diplomatic compound in Libya that killed the American ambassador and three others.

“Unfortunately, this president’s policies have not been equal to our best examples of world leadership and nowhere is this more evident than in the Middle East,” stated Romney at a recent political gathering.

There has, however, been a material impact for the GCC from US international policies over the last several years.

For one, the economic sanctions with Iran are hitting Dubai, the Islamic Republic’s longstanding trading ally in the Middle East. The UAE had committed to implementing UN sanctions directed at sensitive Iranian nuclear activities, but it is the US sanctions that are making it increasingly impractical for banks and energy companies in the UAE to do business with Iran.

Over the past year it has been reported that those sanctions have led to several entities from the UAE being publicly named and shamed for their Iranian business interests.

With the toughened stance of US politicians, the overarching message of business with “them or us” has left mainstream UAE-based banks and trading companies with little option but to comply. If they do not, they risk their easy access to dollars, crucial for the UAE economy where the currency is pegged to the greenback.

Edward Bell, an analyst for the Middle East and North Africa at the Economist Intelligence Unit, says: “The main issue with respect to the US election on the Middle East stems from any shift in Iran policy. If Obama were re-elected we would expect the use of sanctions to be maintained in an attempt to encourage Iran back to negotiating.

“If Romney won the presidency, it is unlikely there would be any dramatic shift in the US’s stance on Iran given the country’s and military’s reluctance to get involved in another Middle Eastern conflict. But you may see the US under a President Romney less willing to carry out negotiations unless there was a serious shift or easing in Iran’s position on its nuclear programme.”

Although the UAE is now viewed as a co-operative partner for implementing US sanctions, its historic relationship with Iran is not so easy to deconstruct, as many Emirati families trace their roots to their neighbour, with decades-long trade links.

Whatever the result this month, America will emerge as an extremely divided country with an even slower and more cumbersome political decision- making process. Romney, for instance, simply wouldn’t have the popular mandate to play war games with Iran or Syria. And Obama may get swallowed by his longer-term plans for deficit reduction, which might weaken the US economy and hit oil prices.

So, what started a few months back as a heated slanging match between two ideologically divided candidates might turn into a boringly predictable political stalemate.

The election will unlikely change the GCC drastically in the short-term, rather it will offer some indications about the long-term nature of global economics and how best to take advantage.