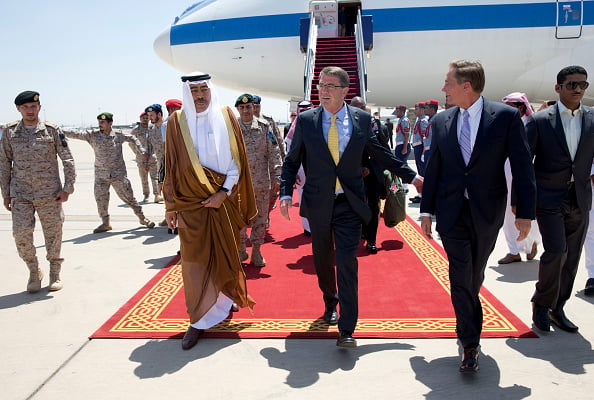 U.S. Defense Secretary Ash Carter flew into Saudi Arabia for meetings on Wednesday with King Salman and his security leadership to reassure the kingdom of America’s support after Washington struck a nuclear deal with its arch-rival Iran.

Carter said ahead of his trip that he aimed to discuss American strategy to counter “Iranian aggression” in the region, as well as the fight against ISIL.

Officials say the talks will cover cooperation with Saudi Arabia in areas like missile defence and cyber and maritime security, although no new arms deals are expected.

The conservative, mainly Sunni Muslim kingdom is engaged in a contest for power with Shi’ite Iran stretching across the region. It fears the nuclear deal will free Tehran from international pressure and sanctions, giving it more room to back allies in proxy wars, from Yemen to Syria.

Since Salman took power earlier this year, Riyadh has pursued a more muscular approach to Iran, launching a war against allies of Tehran in Yemen and providing more help for rebels fighting against Syrian president Bashar al-Assad.

So far its response to the nuclear deal has been lukewarm public praise, coupled with private condemnation.

Prince Bandar bin Sultan, a former head of the kingdom’s intelligence services, cautioned last week that Iran’s nuclear deal would allow it to “wreak havoc in the region.”

President Barack Obama, however, has forcefully argued that the deal will make the United States and its allies safer by removing the threat of a nuclear Iran.

Carter’s trip has been designed to deliver that message and has included two days of meetings this week in Israel, which fiercely opposes the agreement.

One source familiar with the issue said U.S. efforts to reassure Saudi Arabia after the Iran deal could accelerate a deal for Riyadh to acquire the THAAD system, but no announcement was expected during Carter’s visit.

Saudi Arabia had been expected to acquire a THAAD system in about two years, after a similar deal with Qatar. United Arab Emirates has already signed an agreement to buy the air and missile defence system.