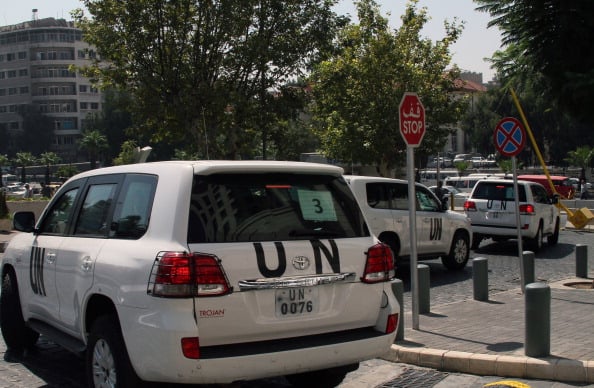 U.N. chemical weapons experts interviewed and took blood samples on Monday from victims of last week’s apparent poison gas attack in a rebel-held suburb of Syria’s capital, after the inspectors themselves survived sniper fire that hit their convoy.

Military chiefs from the United States and its European and Middle Eastern allies met in Jordan for what could be a council of war – should they decide to punish Syria for the worst reported chemical weapons attack in 25 years.

Washington says President Barack Obama is considering options to respond to what the United States believes was the mass gassing of civilians by President Bashar al-Assad’s forces on Aug. 21.

Many hundreds of people died in Damascus suburbs in what appears to have been the worst chemical weapons attack since Saddam Hussein gassed thousands of Kurds to death in 1988.

U.N. investigators crossed the frontline from the centre of the capital, which remains under Assad’s control, to inspect the Mouadamiya suburb, one of at least four neighbourhoods hit by the poison gas last Wednesday before dawn.

The United Nations said one vehicle in its convoy was crippled by gunshots fired by “unidentified snipers”. The team continued on after turning back for a replacement car.

“I am with the team now,” a doctor who uses the name Abu Karam told Reuters by telephone from Mouadamiya. “We are in the Rawda mosque and they are meeting with the wounded. Our medics and the inspectors are talking to the patients and taking samples from the victims now.”

Wassim al-Ahmad, an opposition activist, said members of the Free Syrian Army umbrella rebel organisation and the opposition’s Mouadamiya Local Council were accompanying the inspectors on their tour of the suburb.

“The inspectors are now examining victims being treated at a makeshift hospital in Mouadamiya and are taking blood samples from them,” Ahmad said.

Video filmed at the site showed inspectors in black and blue body armour and blue U.N. helmets walking through a street as curious onlookers came up to watch.

They shook hands with men who appeared to be rebels wearing camouflage vests, and were accompanied by doctors and local residents. The group descended into the basement of a building where they were told injured survivors were being treated below ground to protect them from more shelling. Another video showed an inspector interviewing a patient and taking notes.

Activists say at least 80 people were killed in Mouadamiya when the district was hit with poison gas. Hundreds of people were also killed in three other rebel-held districts – Irbin, Ain Tarma and Jobar.

An opposition activist said a large crowd of people gathered to air their grievances to the U.N. team. There was also a plan for the experts to take samples from corpses.

The inspectors later returned to their hotel, and within an hour residents reported that the shelling of Mouadamiya resumed.

The decision to proceed with the mission despite coming under attack thwarted an apparent attempt to halt their work before it began.

“The first vehicle of the Chemical Weapons Investigation Team was deliberately shot at multiple times by unidentified snipers in the buffer zone area,” the United Nations said in a statement. “It has to be stressed again that all sides need to extend their cooperation so that the team can safely carry out their important work.”

Syrian state television blamed rebel “terrorists” for the shooting. The opposition blamed it on pro-Assad militiamen.

The inspectors had been stuck in a downtown luxury hotel since the attack, waiting five days for government permission to visit the scene a few miles away. They had arrived three days before the incident, with a mandate to investigate earlier, smaller reports of chemical weapons use.

Washington and its allies say they worry that the time that has elapsed, and continuous shelling by Assad’s forces against the affected areas, could make it impossible for the inspectors to collect evidence. The United Nations said Secretary-General Ban Ki-moon was confident the team could get the data it needs.

Speculation has been mounting that Western countries will order some kind of military response to an incident that took place a year after Obama declared the use of chemical weapons a “red line” that would require strong action.

In neighbouring Israel, citizens have been queuing up for gas masks, in case Assad were to respond to a Western attack by firing on Israel, as Iraq’s Saddam did in 1991.

U.S. Defense Secretary Chuck Hagel said any operation would be coordinated with allies: “The United States is looking at all options regarding the situation in Syria. We’re working with our allies and the international community.”

Obama, Cameron and French President Francois Hollande all spoke to each other and to other allies in the past few days in a flurry of phone calls. Cameron also called Russian President Vladimir Putin on Monday.

Several NATO countries have issued statements pledging a response, although none has been specific about what is planned.

Top military officers of the United States, Britain, France, other NATO allies and the main anti-Assad countries in the region, including Saudi Arabia and Turkey, met in Jordan on Monday to discuss Syria, diplomats there said.

The conference was pre-planned but had taken on new significance because of the latest events, the diplomats said.

The Chairman of the U.S. Joint Chiefs of Staff, Martin Dempsey, a co-host of the meeting with his Jordanian counterpart, has been one of the voices in Washington urging caution and emphasising the costs of a full-scale military intervention in a war in the heart of the Middle East.

Obama, who withdrew troops from Iraq and is winding down the conflict in Afghanistan, is reluctant to engage in another war. He could look at limited options such as a missile strike to punish Assad without dragging Washington deeper into the fight.

Syria agreed on Sunday to let inspectors visit the suspect sites, and the United Nations said Damascus promised to cease fire during inspections. The United States and its allies say the offer came too late as evidence has probably been destroyed by heavy government shelling of the area since last Wednesday.

The team of chemical weapons experts left their Damascus hotel base accompanied by a car of Syrian security personnel, as well as an ambulance. At least two mortar bombs struck the area of central Damascus on Monday. Syrian state media said the mortar bombs were locally made and fired by “terrorists”. SANA state news agency said three people were wounded.

Assad denies the accusations that his forces used chemical weapons and said the United States would be defeated if it intervened in his country.

“Would any state use chemicals or any other weapons of mass destruction in a place where its own forces are concentrated? That would go against elementary logic,” he told Russian newspaper Izvestia. “Failure awaits the United States as in all previous wars it has unleashed, starting with Vietnam and up to the present day.”

Russia, Assad’s main arms supplier and diplomatic defender in the U.N. Security Council, says rebels may have been behind the chemical attack. Foreign Minister Sergei Lavrov said any intervention in Syria without a Security Council resolution would be a grave violation of international law.

French Foreign Minister Laurent Fabius noted that Russia and China would probably veto a U.N. Security Council vote to allow strikes against Syria. But British Foreign Secretary William Hague said it would still be possible to respond to a chemical weapon attack without the Security Council’s permission.

There are precedents: in 1999 NATO attacked Serbia, a Russian ally, without a Security Council resolution, arguing action was needed to protect civilians in Kosovo.

Turkey, a NATO ally and major backer of the opposition, said it would join any international coalition even if a decision for action could not be reached at the UN.