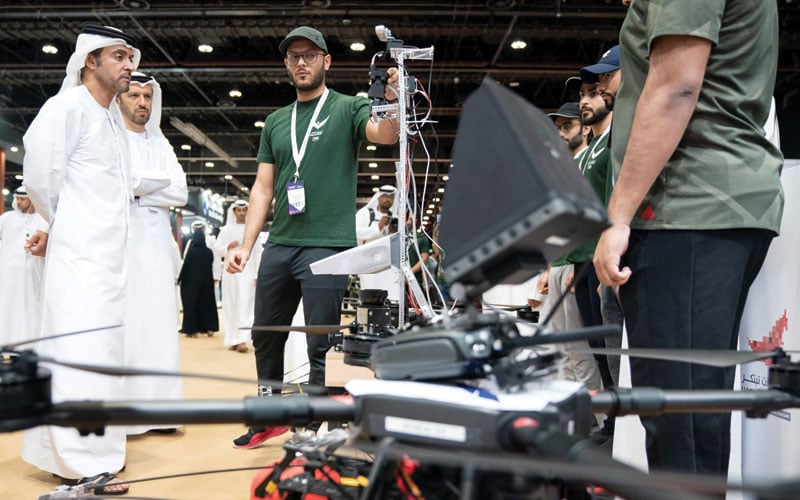 The three-day Unmanned Systems Exhibition (UMEX) and the Simulation and Training Exhibition (SimTEX) at the Abu Dhabi National Exhibition Centre concluded on Tuesday with trade deals worth approximately Dhs749,081,718 reached at the event.

On the first two days of the event, deals worth approximately Dhs624m were signed, whereas on the final day of the event 11 deals were signed valued at over Dhs124m.

The UAE Armed Forces signed seven new deals worth AED 468 million on the second day of UMEX, according to WAM. This included contracts signed with the Abu Dhabi Autonomous Systems Investments Company to purchase drone systems valued at approximately Dhs180m, a Dhs234m contract to supply the Armed Forces with new unmanned Helicopters “Camcopter S-100″ and an approximately Dhs 25m contract with Denel Dynamics from South Africa to purchase drones.

Additionally, Al Awael company was contracted to supply simulations and training system for firefighting on behalf of the Abu Dhabi Police valued at Dhs3.2m.

The event showcases the latest in unmanned technology including drones, robotics and vehicles as well as applications of artificial intelligence in systems and devices that have implications in military, ecological, environmental, civil and humanitarian fields as well.

As reported by UAE news agency WAM, the fourth edition of both exhibitions witnessed a 38 per cent growth in the number of companies exhibiting to 166.

Among those exhibitors, 66 of them or around 40 per cent, were local companies.

The total area of the exhibitions increased by 50 per cent to 25,500 square meters to accommodate the increased number of exhibitors.

The number of visitors also saw a sharp rise of 116 per cent to more than 25,981 visitors compared to the previous edition.

Additionally, the number of participants in the UMEX and SimTEX Conference, held on February 22nd, reached 1,600 participants, an increase of 433 per cent compared to the previous edition.

Major General Staff Pilot Ali Mohammed Musleh Al Ahbabi, chairman of the Higher Organising Committee of UMEX and SimTEX 2020, said, “UMEX and SimTEX are in line with the UAE’s vision and strategy for the future, to promote the advancement of innovation and support the goals of the ‘2020: Towards the next 50’ initiative by elevating future technologies, which affect economy, education, infrastructure and healthcare industries across the UAE.”