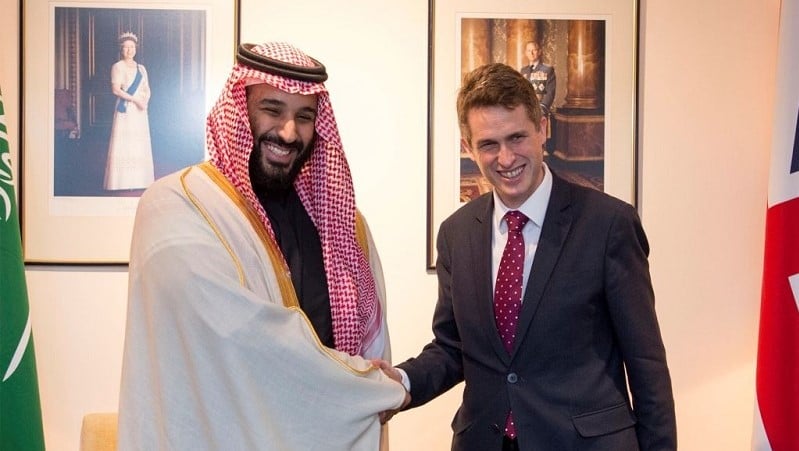 Britain and Saudi Arabia took a step closer to a multi-billion- pound arms deal on Friday, touching on the most inflammatory element of their relationship at the end of an official visit to London that has mixed warm diplomacy with angry street protests.

The two countries also said they had made trade deals worth more than $2bn, without providing details.

Saudi Crown Prince Mohammed bin Salman has been in the British capital for three days on a mission to build broader trade and investment ties, meeting Queen Elizabeth, Prime Minister Theresa May, key ministers and executives.

The countries signed a letter of intent to finalise talks on a multi-billion-pound order for 48 Typhoon aircraft made by BAE Systems. The deal has been under discussion for years but has proven tough to seal.

“We have taken a vital step towards finalising another order for Typhoon jets that will increase security in the Middle East and boost British industry and jobs in our unrivalled aerospace sector,” he said.

Britain and Saudi Arabia have set themselves a GBP65bn ($90bn) trade and investment target for the coming years, with London looking for new post-Brexit markets for its services sector, and Prince Mohammed seeking to convince wary investors his country is a tolerant and modernising place.

But for now the heart of bilateral trade ties remains defence and security. Britain credits Saudi intelligence-sharing with saving British lives and has licensed billions of pounds of weapons and ammunition sales to Saudi Arabia.

That has provided a controversial backdrop to the warm diplomatic welcome for Prince Mohammed, with hundreds turning out on Wednesday to protest arms sales and Saudi Arabia’s role in Yemen’s civil war.

The deal for the Typhoon fighters has become bogged down in negotiations over where production of the jet will take place, with Saudi Arabia keen to have some parts of the process on Saudi soil.

“If agreed, this shameful deal will be celebrated in the palaces of Riyadh and by the arms companies who will profit from it, but it will mean even greater destruction for the people of Yemen,” said Andrew Smith of the Campaign Against Arms Trade.

Despite an unusual advertising blitz that saw adverts promoting Prince Mohammed and Saudi Arabia appear in national newspapers and on taxis and electronic billboards across London, the visit was knocked from the British front pages by the poisoning of a Russian double agent.

Prince Mohammed’s itinerary was largely private, including meetings with bankers, executives and lawmakers, and he did not speak publicly at any point during the trip.

But, in Riyadh, images of the 32-year old Saudi meeting the Christian cross-wearing head of the Anglican church on Thursday dominated newspapers, with headlines citing it as an example of the conservative kingdom’s more tolerant approach to religion.

An image of the heir-apparent striding up Downing Street towards May’s office was lauded by Saudis on social media as emblematic of his youth, confidence, determination and enthusiasm.

The thorny topic of Yemen was on the agenda at a private dinner at May’s country residence on Thursday night, but it was tempered with gifts: May’s office said she presented Prince Mohammed with a family tree showing the descent of the Al Saud dynasty.

The two countries pledged GBP100m of joint funding to support economic growth in the Horn of Africa and East Africa, the joint statement said.