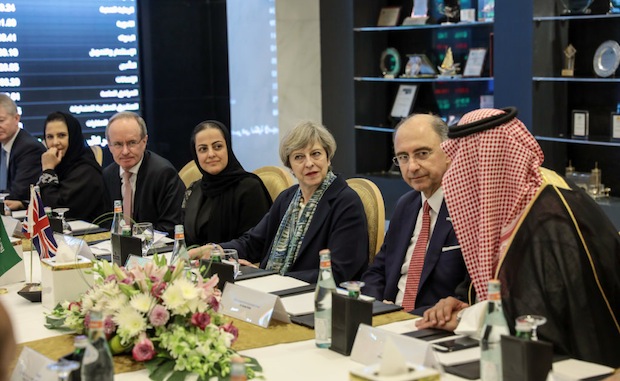 British Prime Minister Theresa May and the chief of the London Stock Exchange (LSE) pitched investments in Britain to the head of Saudi Arabia’s sovereign wealth fund on Wednesday during a two-day visit to Riyadh.

May, who left Riyadh later on Wednesday after talks with Saudi King Salman, discussed issues including security and trade with Britain’s biggest Middle East trading partner, as the U.K. prepares to exit the European Union.

May and Xavier Rolet presented Yasir al-Rumayyan of the Saudi Public Investment Fund (PIF) with a “high-level overview of investment opportunities,” according to a spokesman for the prime minister’s office.

The LSE and other top stock exchanges are trying to win a slice of state oil company Saudi Aramco’s initial public offering, expected to be the world’s biggest.

Saudi Arabia plans to transfer Aramco’s shares into the PIF before listing up to 5 per cent of the company, making the fund a key player in talks with the exchanges.

The IPO, expected in 2018, could be worth around $100bn, Saudi officials have said, and will likely involve multiple exchanges.

The PIF is also expanding its profile with major investments abroad, including a pledge of up to $45bn for the Vision Fund, a global technology fund it is creating with Japan’s SoftBank.

Saudi officials said last year they expect the PIF to expand from $160 billion to about $2 trillion after the Aramco share transfer, which would make it the world’s largest sovereign fund.

The PIF has not yet made any direct investments in British firms, but SoftBank is weighing plans to place its $8bn stake in British chip designer ARM into the Vision Fund.

Before leaving for home, May said Britain was a firm supporter of Saudi Arabia’s “Vision 2030” which she described as an ambitious reform plan.

“As a world leader across a range of sectors, the UK is well placed to help Saudi Arabia deliver these vital reforms,” she said, according to a statement from her office.

The statement said that senior cabinet members including Chancellor Philip Hammond, Secretary of State for International Trade Liam Fox and Foreign Secretary Boris Johnson were expected to visit the Kingdom in coming months.

The Permanent Secretary at the Ministry of Defence, Stephen Lovegrove, will also visit the Kingdom next month for discussions on Saudi defence reform, which Britain has pledged to assist, it said.

Saudi Arabia is the largest recipient of British arms exports by far, according to the Stockholm International Peace Research Institute (SIPRI).

Chinese and Russian military suppliers are also trying to gain a foothold in the Saudi market.