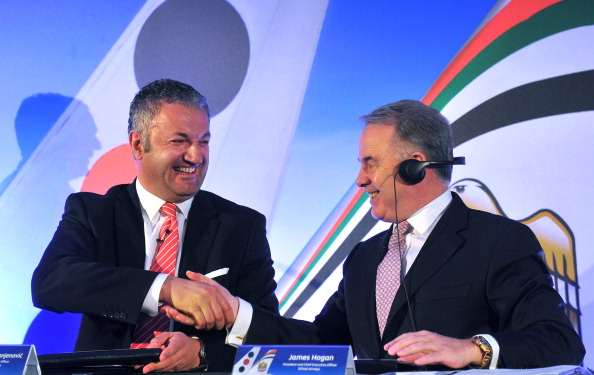 United Arab Emirates’ Etihad Airways, which has stakes in Virgin Australia and Air Berlin, will acquire a 49 per cent stake in Serbia’s loss-making JAT Airways.

The carriers said in a joint news conference that Abu Dhabi-based Etihad would provide a $40 million loan facility to JAT, which would be converted into equity on Jan. 1, 2014.

The amount would be matched by an equal Serbian government capital injection. JAT would also be renamed Air Serbia.

Etihad, which launched in 2003, is on a buying spree to compete with regional rivals Emirates and Qatar Airways.

The Gulf airline and the Serbian government also would each provide further funding of $60 million through shareholder loans and other funding mechanisms to meet working capital requirements and expand the Air Serbia route network.

“The partnership will provide passengers with an extensive route network and smooth flight connections. It will also consolidate and enhance both airlines’ market competitiveness as the relationship deepens over the coming months,” Aleksandar Vucic, Serbian Deputy Prime Minister, said in a joint press release.

Backed by oil wealth, Etihad has aggressively expanded its global reach through codeshares and minority stakes.

Apart from Virgin Australia and Air Berlin, the airline also has stakes in Aer Lingus and Air Seychelles.

It is awaiting regulator approval for a stake in India’s Jet Airways and said on Thursday the deadline for the approval had been extended until the end of August.

As part of the Serbian deal, Etihad will also get a five-year management contract with the airline. Dane Kondic was named chief executive for Air Serbia.

The current JAT Airways fleet of 10 Boeing 737-300 aircraft will be retired and replaced with leased narrow body aircraft, the companies said.

Air Serbia said it would order another 10 narrow body aircraft in the long term, but gave no further details.