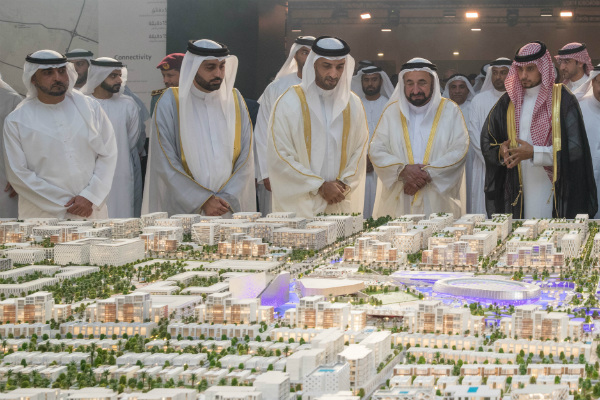 Aljada is claimed to be the largest private-owned mixed-use real estate project in the emirate, spanning some 24 million square metres.

The development, next to Sharjah University City, will eventually accommodate 70,000 people across a series of residential districts with units ranging from villas to townhouses and apartments.

These will be linked by 2.2km of landscaped parks and boulevards and a central hub area with leisure and entertainment options, including coffee shops and restaurants and a musical fountain display.

Other attractions include skate parks, an extreme sports centre and the largest children’s adventure and discovery complex in the northern emirates.

The project will be delivered in 10 phases with construction beginning in the first quarter of 2018.

Units are available for sale to Emirati, GCC and UAE expatriate investors, with delivery to take place between 2019 and 2025.

“We are delighted today to launch a new project that embodies the unique essence of the real estate strategy adopted by the emirate of Sharjah, being an epicentre of science, culture and knowledge,” said Sheikh Sultan bin Ahmed Al Qasimi, chairman of the Sharjah Media Council and Arada.

“We want to offer residents and investors upscale living experiences that are currently unavailable in the market, and ensure a better life for everyone who visits, lives, or works in Aljada. We are confident that this development will raise interest in Sharjah even further, while strengthening its position as a secure and sought-after investment destination.”

Arada was formed in January as a partnership between KBW Investments and Basma Group.

In March the company launched a 5 million square foot residential community called Nasma Residences that is expected to be completed in 2019.

The launch of its latest project follows an 11.7 per cent rise in villa rents in Sharjah during the first six months of the year. In contrast apartment rents declined 7.1 per cent during the same period, according to consultancy Cluttons.