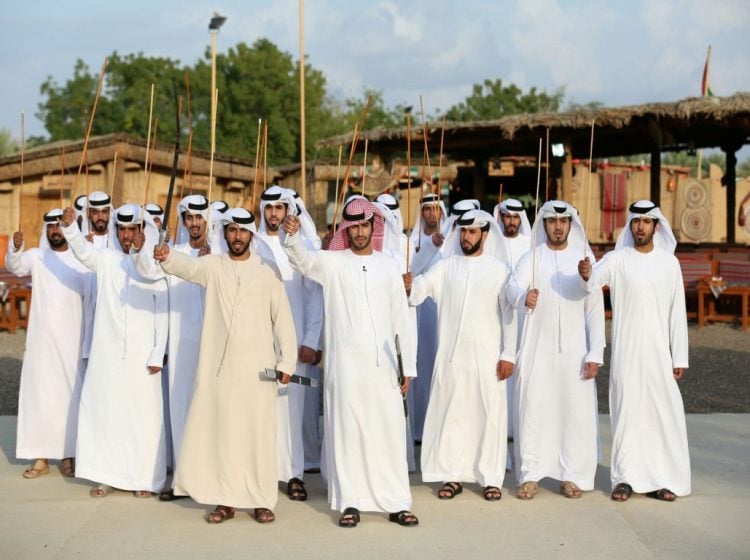 Traditional UAE performance art Al Azi has been added to an UNESCO list of cultural heritage that must be safeguarded.

Al Azi is a performance art that reflects the UAE culture and Emirati society. The art depends on the repetition of poems without music or rhythmic instruments, and is practised at national and social events to instil pride, loyalty and national values, according to a release by state news agency WAM.

The art also praises the traditions of welcoming and honouring achievement, and focusses on the singer and the supporting reciters who give him answers that emphasise his words. Reciters stand in lines behind the singer in a symbolic act of unity and solidarity.

Mohamed Khalifa Al Mubarak, chairman of the Department of Culture and Tourism – Abu Dhabi, said: “Al Azi’s inclusion in UNESCO’s Intangible Cultural Heritage In Need of Urgent Safeguarding list is reflective of our leadership’s directives to support our authentic cultural heritage, and to emphasise on its importance in building national identity and maintaining communication between different generations.

“It also contributes to the achievement of the Department of Culture and Tourism strategic goals in ensuring that the UAE national heritage is embedded in the constant development and progress of our nation.

“In that context, Al Azi is an important performing art which still enjoys wide public participation, highlighting its historical depth and its significant stature among elements of the UAE’s authentic heritage.”