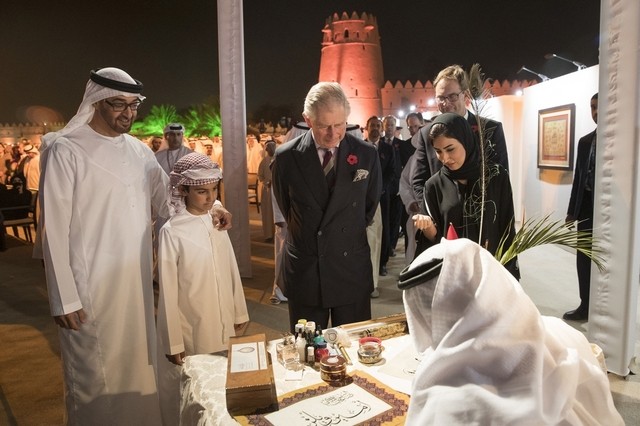 A year-long cultural collaboration between the United Arab Emirates and United Kingdom was launched at a special event in Al Ain.

Sheikh Mohammed bin Zayed, the Crown Prince of Abu Dhabi and Deputy Supreme Commander of the Armed Forces, hosted Charles, Prince of Wales, and his wife Camilla, Duchess of Cornwall at Al Jahili Fort to launch the UK-UAE Year of Cultural Collaboration – a project which will see the British Council and Emirati partners work on a programme of art, literature, science, sport and trade.

The evening of traditional arts and live performances was a highlight of the British royals’ three-nation Gulf trip, which started in Oman and will end in Bahrain.

Inaugurated by Sheikh Nahyan bin Mubarak, Minister of Culture and Knowledge Development, the event took place at a venue with strong British connections.

Built in the 1890s as a summer retreat for Sheikh Zayed the First, the fort became a base in the 1950s for the Trucial Oman Scouts, a paramilitary force led by British officers.

“The Trucial Scouts earned the respect of the population as they settled disputes and protected borders. The British-led scouts were the base upon which the UAE built its own Armed Forces,” said Sheikh Nahyan.

The Prince of Wales and Duchess of Cornwall joined guests for a live classical performance by Emirati and British musicians, as well as an art exhibition at the heritage centre in Al Ain, which featured traditional calligraphy works.

A centrepiece of UK-UAE 2017 will be a digital version of a Quran manuscript believed to be among the oldest in the world, which was inaugurated by Prince Charles on Monday.