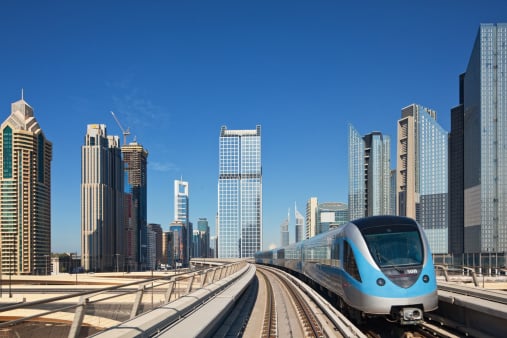 The UAE plans to invest $25 billion in its railway infrastructure, accounting for 10 per cent of the entire MENA region’s investment in the sector.

That’s according to senior officials from the UAE’s National Transport Authority (NTA).

While $11 billion has been allocated for Etihad Rail, which aims to connect all the emirates, Abu Dhabi’s Department of Transport has approved a budget of $8 billion for its metro project, and Dubai’s RTA has announced plans to spend $2 billion on developing and expanding its metro and tram facilities.

The remaining $4 billion has been allocated in lieu of inflation and other contingencies, said Nadhem Bin Taher, acting director general of NTA.

“Since the projects are to be completed within the next six to seven years, we need to have some spare amount of money for new technologies and new products that enter the market,” he told reporters.

The first phase of the 1,200km Etihad Rail, which runs from Shah and Habshan to Ruwais, is almost complete, confirmed Abdulla Mohamed Al Nuaimi, Minister of Public Works and chairman of the NTA.

“We hope to inaugurate phase one by the end of this year and phase two has also already started,” he said.

Etihad Rail, which will be developed in three phases, is also part of the wider GCC railway network that aims to connect all the six Gulf states.

“The plan is to connect the entire GCC by 2018,” stated Al Nuaimi. “However, in the UAE, we are probably ahead of the other states. Oman announced last week that it will be launching its railway network by 2017 and hence that would expedite our connection with Oman. Saudi’s railway development is also in the pipeline – they have started the implementation process. We are hopeful that by 2018, it will be completed.”

Details such as immigration, customs and other logistical matters are currently being discussed by a GCC-wide committee to ensure that all the systems are in place, said Bin Taher.

Within the UAE, the NTA is also in the process of creating a new federal law to govern and regulate the sector.

“The federal law will cover all the operators of all the rails within the UAE and will look into issues such as operations, safety and implementation,” explained Al Nuaimi.

The first draft has already been sent for approval, and the law is expected to be in force next year, he said.

The NTA has also signed an MoU with exhibition firm Terrapin to partner in the hosting of the Middle East Rail Congress in Dubai from 2014. The event is expected to bring in major industry leaders from the region and across the world to share better practices and will help the UAE become a hub for the railway industry, he said.

With Dubai one of the main contenders bidding to host Expo 2020, the NTA is also preparing to increase rail connectivity in the event of a successful bid.

“We are hoping that Expo 2020 will be part of our plans. We are assuming that it is agreed upon to be in Dubai, and our plans will be modified according to the final decision in November,” said Al Nuaimi.