The UAE slid one place to 17th in this year’s World economic Forum (WEF) Global Competitiveness report, but still remained at the top of the Arab world.

The slight decline came after the UAE climbed one place last year thanks to small gains in areas including technological adoption and business sophistication.

This year the country’s score in the ranking of 137 countries based on 12 main pillars increased slightly from 5.26 to 5.3 but it was outpaced by other countries that posted larger gains.

“This improvement shows the resilience of the UAE economy, in part due to increased diversification, which is reflected in its strengthening macroeconomic environment and its ability to weather the double shock of lower oil and gas prices and reduced global trade,” the WEF said.

“Although the IMF predicts GDP growth to drop to 1.3 per cent this year, non-oil growth is expected to pick up, suggesting that the country’s diversification strategy is bearing fruit.”

The emirates ranked third in goods market efficiency, fifth in infrastructure and fifth in the institution pillar. It also ranked among the top 20 countries in 80 of 114 indicators. 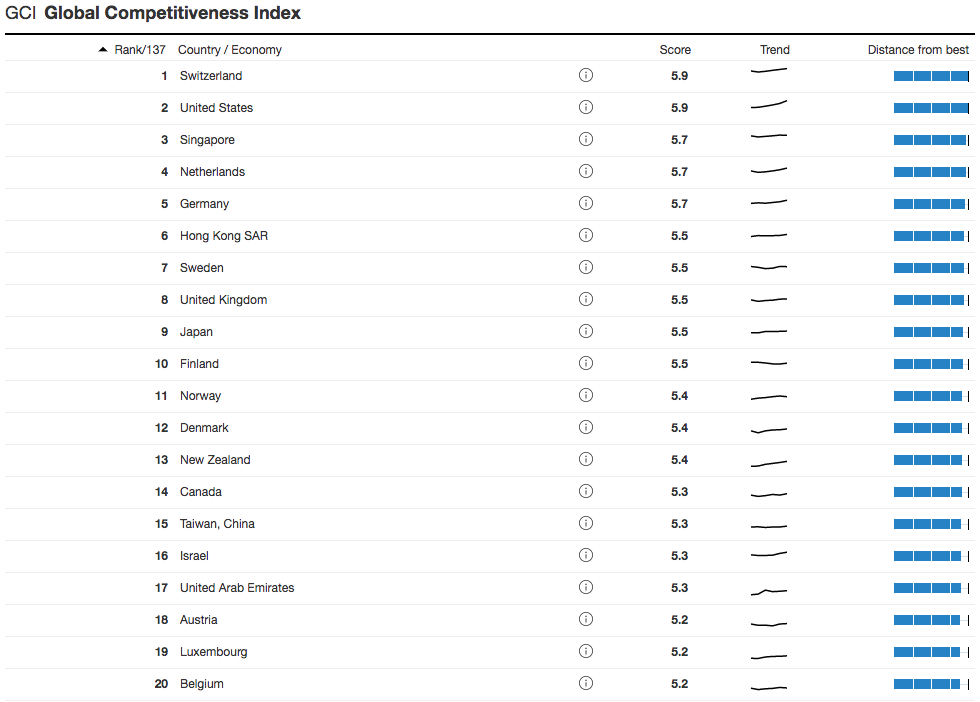 Under the institutions pillar, it stood first in efficiency of government spending, second in public trust in politicians and burden of government regulation and third in protection of minority shareholder interests.

Elsewhere, the UAE ranked first globally in government procurement of advanced technology, second for mobile broadband subscriptions and third in state of cluster development and availability of scientists and engineers.

Its most problematic factors for doing business in an executive opinion survey were listed at access to financing (17.0), inflation (14.4), inadequately educated workforce (14.0), restrictive labour regulations (12.6) and poor work ethic in national labour force (8.6).