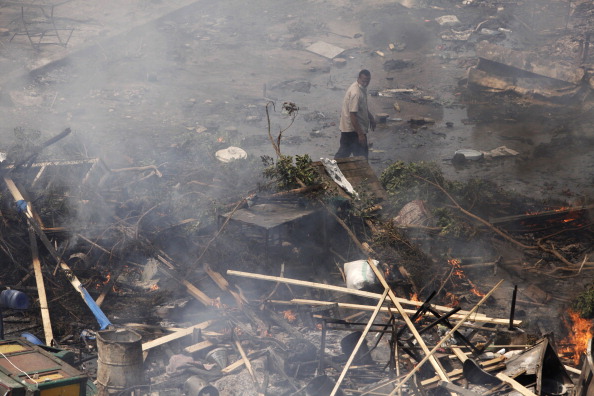 The United Arab Emirates has expressed support for the Egyptian government’s crackdown on supporters of ousted President Mohamed Mursi when authorities forcibly broke up protest camps, killing hundreds of people.

Egyptian security forces, with bulldozers, teargas and live ammunition, cleared out two Cairo sit-ins on Wednesday that had become a hub of Muslim Brotherhood resistance to the military after it deposed Mursi on July 3.

“The UAE … re-affirms its understanding of the sovereign measures taken by the Egyptian government after having exercised maximum self-control,” the UAE foreign ministry said in a statement carried by state news agency WAM late on Wednesday.

“What is regretful is that political extremist groups have insisted on the rhetoric of violence, incitement, disruption of public interests.”

The rise of Mursi’s Muslim Brotherhood in Egypt since 2011 has unsettled most Gulf Arab states, including the UAE, which feared it would embolden Islamists at home.

Egyptian security forces moved against the protesters after Western and Gulf Arab mediators, including the UAE and Qatar, failed to broker a diplomatic solution to the standoff.

“The UAE re-affirms its interest in protecting Egypt and Egyptians from violence, bloodshed, and urges the start of national reconciliation,” said the statement.

Qatar, a long-time supporter of Mursi’s Muslim Brotherhood government, condemned the bloodshed on Wednesday and said the best way for Egypt to resolve the crisis was through dialogue.

“Our condemnation came after days of communication to try to reach a peaceful settlement through dialogue among all parties and therefore we were surprised by what happened,” Qatari Foreign Minister Khaled al-Attiya said in comments broadcast on Al Jazeera television early on Thursday.