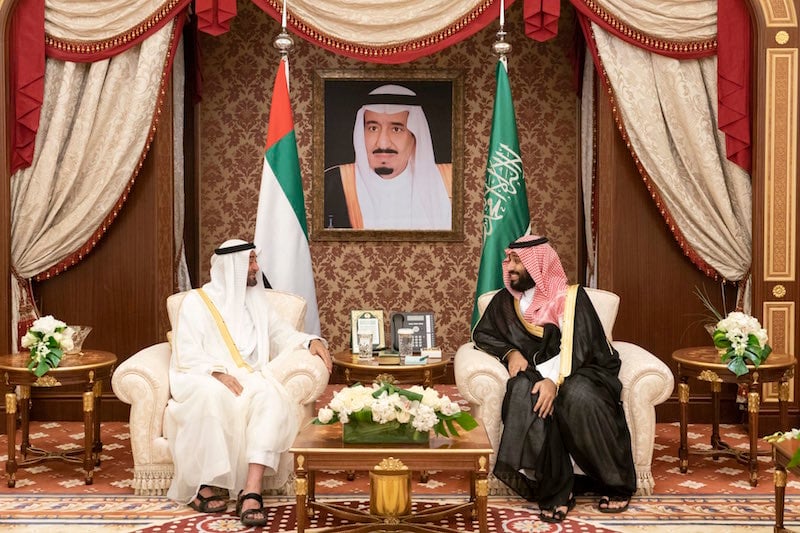 The UAE and Saudi Arabia announced a partnership for economic, developmental and military integration through 44 strategic projects during a historic meeting on Wednesday.

The new initiative, called the “Strategy of Resolve” was prepared by 350 government officials in 12 months, official news agency WAM reported.

The strategy focusses on three main areas: the economic axis, the human and knowledge axis, and the political, security and military axis.

The leaders of the two countries have set a timeframe of five years to implement the strategic projects, the report stated.

Our countries have the potential, resources, the correct strategic vision & above all, our youth – our most valuable asset. Our meeting today & the launching of Saudi-UAE Coordination Council is a framework that will enhance development opportunities, cooperation & empowerment. pic.twitter.com/0yFGzDvMr3

During the meeting, a number of joint projects were announced covering food security, medical stocks, a common supply security system and joint investment in oil, gas and petrochemicals.

The new strategy also includes a plan to establish an agricultural investment company with a capital of Dhs5bn ($1.36bn), a joint venture fund for renewable energy and a third investment fund for small and medium enterprises.

The initiative will also facilitate the flow of traffic in ports, build a unified industrial database, empower the banking sector in both countries, unify economic procedures and legislations and create a joint council to coordinate foreign investments, the report added.

In terms of security and military cooperation and integration, the UAE and Saudi will coordinate foreign military assistance and standardise the military industry sector.

The two countries also plan to activate joint manufacturing industries, implement an electric linkage project, launch joint housing and financing services and solutions, establish a joint centre for the development of desalination technologies, cooperate in the management of infrastructure projects, and cooperate in the development of modern financial technology techniques.

Overall, the Coordination Council witnessed the signing of 20 memorandums of understanding, the report added.

We’re committed to strengthening cooperation & continuing our constructive approach. Our alliance with KSA is a strategic choice that increases our strength & provides both countries a promising future. We’re keen to form a nucleus that brings all Arabs together. pic.twitter.com/sTUSdHIcdA

Sheikh Mohammed said: “We are the two largest Arab economies, forming the two most modern armed forces. The economies of Saudi Arabia and the UAE represent a gross domestic product of one trillion dollars, our joint exports rank fourth globally and amount to $750bn, plus Dhs150bn ($40.8bn) annually invested in infrastructure projects, which generates huge opportunities for bilateral cooperation.

“We have a historic opportunity to create an exceptional Arab model of cooperation. Our solidarity and unity protect our interest, strengthen our economies and build a better future for our peoples,” he added.

The Saudi-Emirati Coordination Council was first established in May 2016 to achieve the common objective between both countries and enhance the work of the GCC.