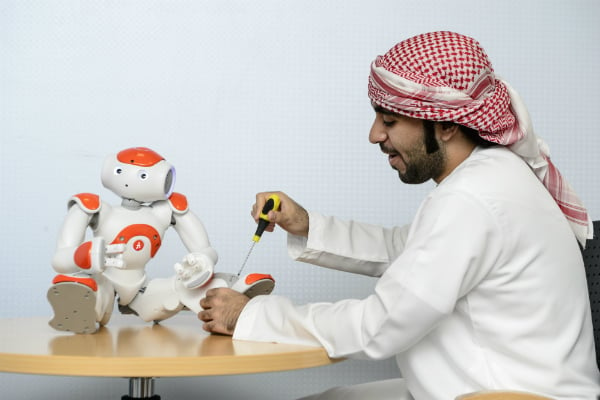 The overall goal is to have a robot than can correctly interpret the human gaze, touch and gesture and produce the same in a meaningful way according to Dr Massimiliano Cappuccio, associate professor at UAEU’s Department of Philosophy.

He will be working with Jose Berengueres, assistant professor at the university’s robotics lab, with the hope the creation will be able to express and interpret human emotion without language.

Work will be split between Dr Cappuccio’s team for the social science of the project and Berengueres for the technology.

“We won’t focus too much on linguistic communication, it is more something that can express a lot of emotions and also interpret your emotions and establish a strong bond with the human user,” said Dr Cappuccio.

“Imagine something like a pet that uses a lot of touch, gaze and gesture to communicate; no language.”

“In cognitive robotics, first of all you need to understand how the human mind works ­ – functions like, for example, memory, perception, language processing – and the purpose is to replicate these functions in an artificial agent,” said Dr. Cappuccio.

“Of course we are still at the early stage and there are concerns – concerns, for example, about how robots can make decisions regarding ethical issues or decisions that can have ethical implications.”

The project forms part of wider robotics and artificial intelligence work at the university including the upcoming Joint UAE Symposium On Social Robotics to be held in November.