The UAE has overtaken Qatar to be ranked the most competitive economy in the Middle East and North Africa, according to a new report by the World Economic Forum.

In the 2016 Global Competitiveness Index, ranking of 138 counties, the emirates climbed one place to 16th thanks to small gains in areas including technological adoption and business sophistication.

This was despite deteriorating macroeconomic stability linked to lower energy prices, which has led to a rise in inflation and public debt and the emergence of a fiscal deficit, according to the WEF.

“Overall, the UAE boasts a number of competitive strengths: infrastructure is top notch (4th overall) and goods and labor markets are open and efficient,” the organisation said.

The UAE was encouraged to diversify its economy and enhance innovation – where it currently ranks 25 – to improve its ranking.

“There is equal scope for better leveraging digital technologies that are an important enabler of business innovation. Currently the country ranks 29th in ICT use,” the WEF said. 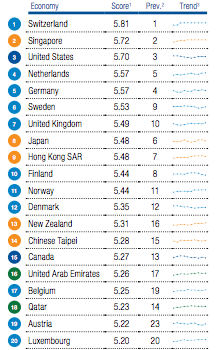 In the list, the UAE ranked first globally for absence of the impact of crime and violence at work and road quality and second for trust in leadership and airport infrastructure, according to state news agency WAM.

However, a survey of the most problematic factors for doing business conducted by the WEF suggested several areas for improvement. Restrictive labour regulations (18.1), access to financing (18), inflation (12) and an inadequately educated workforce (12) were the top three concerns cited by respondents in the UAE.

A poor work ethic among the national labour force (7.4) and inefficient government bureaucracy (7.1) were also highlighted.

The UAE also recently increased its ranking in the Global Innovation Index study.