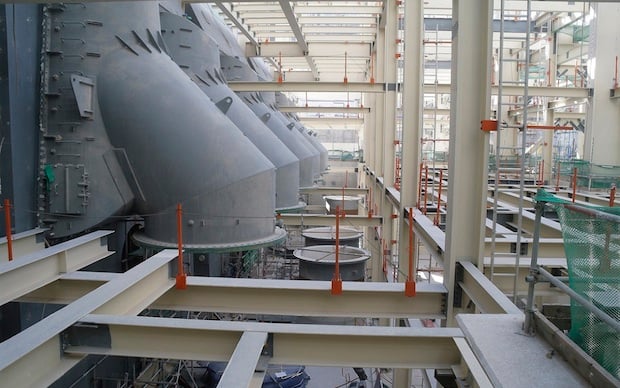 Emirates Nuclear Energy Corporation (ENEC) has completed the installation of the condenser for Unit 4 of the Barakah Nuclear Energy plant, it announced on Tuesday.

Manufactured in South Korea and transported to Barakah, the condenser is made up of three sections, each measuring 27 meters in length and weighing 700 metric tonnes – the equivalent of approximately two Airbus A380 jets.

The three sections were safely assembled in the open next to the turbine building of Unit 4, using a system of hydraulic jacks and complex winches and rollers, a statement said.

The condenser plays an important role in the generation of electricity and is used in all types of energy plants.

In a nuclear reactor, nuclear fission creates heat which turns water into steam. The pressure of the steam turns a turbine which then spins the generator, which produces electricity. The condenser cools the steam back into water, allowing the process to be repeated continuously.

The Barakah condensers are specifically modified according to the environmental conditions of the Arabian Gulf, ENEC said.

As per the regulations set by the Federal Authority for Nuclear Regulation, the temperature of discharge water must not be more than 5 degrees celsius above the ambient temperature of the Gulf.

The condenser’s 85,000 titanium and super stainless steel tubes will have a volume of 6000 m3 of sea water passing through them per minute when the plant begins to generate electricity.

“The successful installation of the condenser is a major milestone in the construction of the fourth unit at the Barakah Nuclear Energy Plant,” said ENEC CEO Mohamed Al Hammadi.

“With similar work being completed for Units 1, 2 and 3 in the beginning of 2014, 2015 and 2016, respectively, this clearly demonstrated the smooth sequencing of construction, proving the benefits of building four identical nuclear units simultaneously. The Barakah plant now has four of the region’s largest condensers safely and effectively installed.”

The unit 4 turbine building will now continue with construction works to be completed over the next few months. Unit 4 began construction in 2015 and is currently more than 38 per cent complete.

Overall, construction of units 1 to 4 is now around 76 per cent complete, ENEC said.

The Barakah Nuclear Energy plant, in the western region of Abu Dhabi, is scheduled for completion in 2020, with construction having started in 2012.

With all the four reactors online, the facility will deliver up to a quarter of the UAE’s electricity needs and save up to 12 million tonnes in carbon emissions every year.