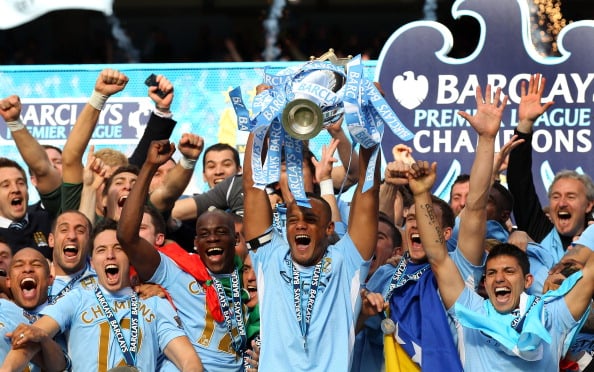 Abu Dhabi’s investment in Manchester City and other European clubs tops one billion pounds ($1.5 billion) but most clubs in the United Arab Emirates’ domestic league play in near-empty stadiums and often rely on government largesse to survive.

The local game has big ambitions yet little chance of realising them due to the country’s small population which is apathetic about domestic teams.

However, these investments have not directly benefited the domestic game, said Yousuf al-Serkal, president of the UAE FA.

“We haven’t seen any co-operation between those clubs and our clubs or the national team,” Serkal told Reuters.

On a typical European Champions League night, Dubai’s bars and cafes are packed with supporters in Barcelona, Manchester United and Real shirts, the glamour of Europe’s elite club competition alluring to expatriates and locals alike.

Yet just a few thousand, less than half the ground’s capacity, watched Al Ain’s 3-0 home win over Dubai in April that sealed a second straight title for the desert oasis town.

The low attendances undermine the UAE’s aims of producing a competition that will ultimately rival the best in Asia.

“Elsewhere, the domestic population grows up supporting certain clubs and that’s the case here for the Emirati population, but not necessarily for the expat transient population.”

The UAE is a federation of seven emirates in which Abu Dhabi – home to about 5 percent of the world’s oil reserves – and Dubai, the Gulf’s commercial hub, are dominant. Nearly 90 per cent of the 8.2 million population are foreign.

“People, not only in the UAE but the whole Middle East, love football, but they like to watch Barcelona, Real Madrid, Man United, Spain and France, rather than their own teams and their own players,” former Real Madrid defender Michel Salgado, who became director of football at Dubai Sports City’s Football Academy in April, told Reuters.

“So the first and most difficult thing is to try and change that culture.”

Smith believes the league can still capture fans’ attention despite Europe’s top leagues enjoying extensive coverage on UAE television. “If you love football, you’ll watch football from throughout the world – but the focus has to be on the live match-day experience,” he says.

Among the UAE clubs, only Abu Dhabi’s Al Jazira Stadium has a capacity greater than 20,000 and although the league does not publish attendance figures, crowds are often only in the hundreds.

The UAE Pro League was formed when the top flight turned professional in 2008. It changed its name to the Arabian Gulf League in May although only UAE clubs compete in it.

“It will take some time – Japan has had 20-30 years of growth in their league – we’ve come a long way in the first five years,” said Smith.

Al Ain won the first ACL in 2003 and were runners-up two years later, but no UAE team has won a knockout tie since 2007 despite up to four clubs participating each season, and they struggle to compete against their continental counterparts.

“What we lack is revenue generation from ticket sales,” Abdullah al-Naboodah, chairman of Dubai’s Al Ahli, who were domestic runners-up in 2013, told Reuters.

“This is a problem in the UAE – because we are trying to promote more people coming to the stadium we are giving them free tickets, but this kind of culture needs to change.”

Local media report that some clubs even pay supporters to attend matches. This has boosted the stadium atmosphere but for clubs meant to run along commercial lines it appears a dubious strategy.

“Improvement on the field will attract more people but making revenue out of them will probably take longer,” said Naboodah.

The league’s TV deal expired at the end of last season and in June it agreed in principle to sell the rights to government-owned Abu Dhabi Sports for three seasons. “I think the revenue will grow a lot in terms of TV, it’s much better than this season,” said Naboodah.

But for now, the 14-club top flight are thought to receive handouts from the governments of their respective emirates.

“Hopefully, we will be looking at a first phase to be concluded over the summer so we can start next season already with some of that programme complete,” said Smith.

“Then we will see others come on board throughout the first and second seasons of that cycle.”

UAE clubs have typically fielded a mixture of homegrown and other Arab players, plus foreign journeyman and ageing former greats eking out one last payday such as Luca Toni and Fabio Cannavaro.

League clubs can employ three foreign players, plus one Asian player, but the FA’s Serkal wants to cut this to three in total. There has been an influx of younger overseas talent, including Ghanian striker Asamoah Gyan, 27, and Chile midfielder Luis Antonio Jiménez, 29, since the 2011-12 season.

“We don’t see so many fans as compared to Europe, but we have quality players in the league,” said Gyan, who has scored 56 goals in 46 appearances over two seasons.

“The French league started from somewhere and it’s a now a big thing. You can see the (UAE) league is being recognised now. It’s not as good as Europe, but it will improve.” (Editing by Mike Collett)