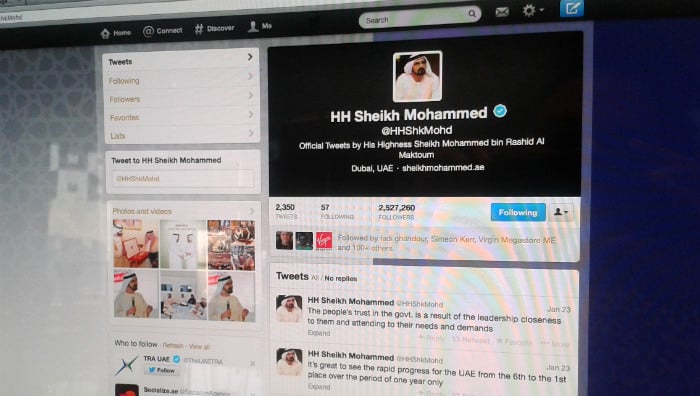 In December 2013, Dubai’s ruler Sheikh Mohammed bin Rashid Al Maktoum announced a week-long brainstorming session with the UAE’s citizens on the microblogging site Twitter. His goal here was to to generate fresh ideas for developing the health and education sectors, the best of which were to be discussed at a private cabinet retreat later.

To the surprise of some, the initiative saw massive public participation with more than 50,000 participants proposing around 82,000 ideas. It is understood that some of the selected members were even asked to join in the cabinet retreat to share their ideas in detail.

This event was yet another example of how arab leaders are now increasingly turning towards social media to connect better with the public, leveraging increasing internet connectivity and smartphone penetration.

According to the Arab Social Media report 2014, released by Dubai School of Government, social media usage in the Arab world has shown strong growth in the past year. Facebook’s user base in the Arab region increased by 49 per cent year-on-year while Twitter and linkedin saw a 54 and 79 per cent jump respectively, over the same period.

It is not surprising then that the government will go to where its people are. Crucially, the report also indicated that the public had a positive view of governments using social media. Around 55 per cent of the respondents said that they strongly support the use of social media by their governments for the design and delivery of public services.

Dr. Saeed Al Dhaheri, an independent researcher and a social media expert in the uae, explained that social media has increasingly become a primary choice for public communication for many governments in the Middle East and elsewhere.

“Another way of engaging citizens is to discuss and formulate government policies. Such an engagement will increase the transparency between government and the citizens and also increase the level of trust between them by providing up to date information directly from the government, eliminating any rumours.”

He added that the proper use of social media both internally and externally by the government organisations could lead to more efficiency.

“I believe the structural data collected by the governments through their interactions with the public on social media can be used as input for big data analytics, which can be used to improve government operations and which in turn will improve its efficiency.”

Although presence on social media is vital for governments, being on too many platforms can also be counterproductive, experts said.

“It [being on too many social media sites] hinders organisation capability to master and manage all accounts created in social media. Subsequently, it can result in poor management and hurt the organisation’s reputation,” said Dhaheri.

He said that this could also create additional setbacks if the government organisation is unclear about its content strategy when communicating through social media and which platform they want to use.

“Some information is good to be communicated through Twitter while some is better through Instagram or Facebook. Rather than sending the same information on all channels where the interest of the audience is different, the government needs to focus on where their target audience is mostly located and use that proper channel of communication to reach them.”

Dhaheri said that being on too many channels was one of the problems he noticed among some of the government departments in the UAE and the GCC in general.

Venturing out to use social media without a clear strategy could also lead to situations that might risk the government’s credibility among the masses.

“Some departments also rush to use social media without a proper policy that establish the rules of engagement and help handle negative situations. All these need to be addressed by the government when adopting social media.”

Dhaheri particularly cautioned governments to refrain from indulging in an argument when communicating through a social media platform.

He emphasised that if there was a negative comment on a government’s social media website about one of its services or features, it should be first politely acknowledged. The department should then address that particular comment if it was a complaint about the service offered, discuss internally and respond to a person with a solution rather than engaging in an argument in a platform as public as social media, the expert warned.

Not having the right team and resources to manage government social media accounts can also be counterproductive in the long run, he said suggesting that governments should invest in providing social media training to employees handling the accounts.

Another concern is online security, with Dhaheri suggesting that governments must take measures to secure and monitor their social media accounts to prevent and detect hacking attempts.

Dhaheri attributed such low participation levels to the culture of the region.

“Low engagement on social media might be a cultural issue as people in the GCC might feel shy to participate and voice their opinions in public. But Sheikh Mohammed’s session saw a lot of participation, so these kinds of interactions need to be encouraged,” he said.