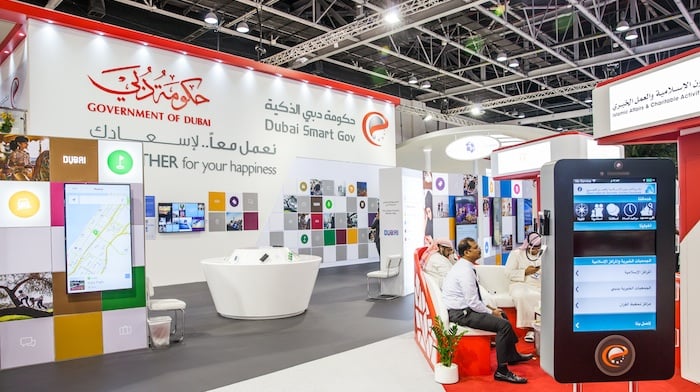 “Smart” grabbed the distinction of being the most popular word at the annual GITEX technology exhibition in Dubai this year. Exhibits at the stalls featured everything from smart cars to drones, all geared towards the UAE’s, and specifically Dubai’s, vision of becoming the smartest city in the world.

“I want UAE government services to be delivered to the public through mobile phones,” he clearly stated.

In line with that trend, the government stands were grand and impressive, and new launches and announcements, particularly in the mobile front, came in a steady stream during the weeklong event.

It all began with Sheikh Mohammed launching the ‘Happiness Meter’, an initiative to measure the happiness and satisfaction of the public in government services on a daily basis using electronic devices connected to a central network.

The initiative will send daily reports to decision makers that will enable them to monitor the types of government services that people are most satisfied with, and identify the geographical areas where these services are being provided.

While the initiative is starting with the public sector, the private sector will also be eventually included in it, said Sheikh Mohammed.

“The ultimate goal of all our initiatives is to make people happy and make their lives simpler by reducing the time taken for completing government services,” he stated.

Among the most prominent launches came from the UAE’s Telecom Regulatory Authority (TRA), which unveiled its first mobile application, providing services including device verification and signal coverage to users.

The UAE’s Ministry of Environment and Water also joined hands with telecom operator du to unveil the Carbon Footprint app, which aims to educate people on how to track their emissions.

Dubai Health Authority, meanwhile, revealed that it would soon have a smart pharmacy system, which will involve the use of robots to arrange and dispense medicines.

Apart from the government announcements, a plethora of smart initiatives were also launched by private sector entities, targeting the smart city agenda.

But with so many players on board, experts stress that there is a need for a single authority to oversee the whole process.

“There needs to be one regulatory body, playing the very important role of trying to put the different players together,” explains Rafiah Ibrahim, president, Ericsson MEA. “If you have a very strong regulator, they can facilitate discussions or agreements, but if there is none, you will face a situation where there are delays because there are a lot of people who want to do things differently.”

Ashish Panjabi, COO of Jacky’s Group, agrees that complexities emerge because of the various parties participating in the process. “The whole issue is that you have a lot of players involved in order to make something smart and it takes one player to stand back and derail the entire process.

“Typically, a lot of the players are big entities and big entities are slow to move since they have legacy systems. It’s about getting those systems up to date and moving them. Although individually they may have the technology and capability, getting all the wheels working in the same direction is the challenge,” he adds.

In a step towards that direction, the Abu Dhabi Systems and Information Centre (ADSIC), the entity in charge of the emirate’s ICT agenda, is currently aiming to develop a single platform for all government services in the capital.

“Our aim is to make all the services available on a single mobile platform by next year,” he said on the sidelines of GITEX.

He also revealed that the UAE government is mulling the implementation of a single point sign-in platform to access services across the country. People will be able to conduct online transactions related to any emirate through the platform, he said, adding that further details would be disclosed soon.

But as more smart services come online, are people actually using them? Not necessarily, say experts.

“We need to educate the end-users to use these smart apps; they are not hosted for fun,” says Majed Eid, regional sales director at analytics firm Nexthink. “The government has invested heavily in creating these apps. We have to use them to save time and increase productivity of government entities and enhance end- user experience.”

The culture is still new for some customers, explains ADSIC’s Al Mansoori. “So we have to teach them first – tell them, and make them aware of what we have in terms of services. The shift in mindset is already happening,” he says, quickly adding, “I’m not worried about the younger generation.”

Rabih Dabboussi, managing director for Cisco UAE, cites nature’s law of ‘survival of the fittest’, saying apps that provide value will survive and flourish, while apps that don’t, will whither and die.

“People may download an app, but if it is not useful, doesn’t function well and is not reliable, people will forget it. When you release a functionality or an app, it has to have a purpose, it has to have a value that is being delivered and has to replace something today that may be more costly to do, difficult to do, or both.

The most crucial aspect – the first building block of a smart city, however, is network infrastructure.

In this aspect, the UAE still needs to expand and improve the capability of its existing infrastructure, according to Evan Wang, president, Middle East, of Chinese tech firm ZTE.

“Currently, broadband access is not available everywhere; there is a need to increase access to places such as hotels, buildings and scenic spots. However, there’s no need to reconstruct or replace the infrastructure – they just need to expand and add on it. All the technology that operators adopt can be smoothly upgraded and easily expanded to provide more capacity.”

The report from IDC and Huawei also urged telecommunications operators working on smart city projects to collaborate with vendors to ensure a “holistic solution” while advising them to invest in “future-proofing” the network forming the backbone of the smart city.

“Mobile broadband infrastructure may emerge as the most desirable network technology — one able to address both a city’s current needs and its future requirements,” the companies state in the report.