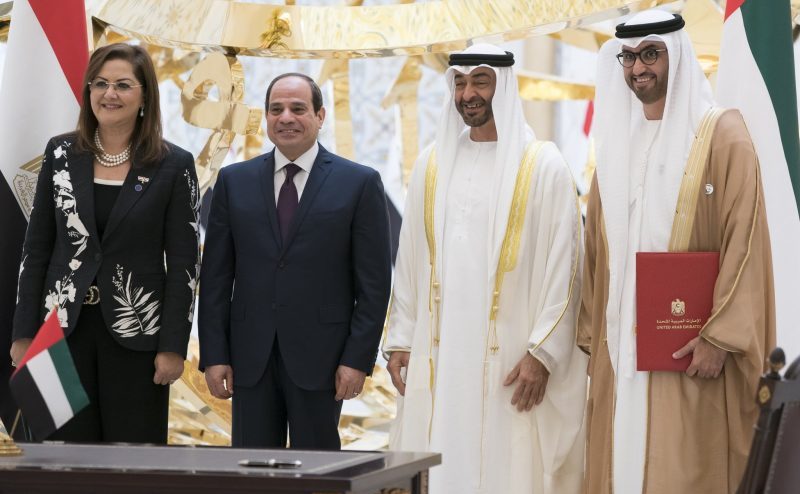 Egypt and the United Arab Emirates are setting up a $20bn joint strategic platform to invest in a range of sectors and assets, the presidency said Thursday.

The deal comes as President Abdel-Fattah El-Sisi is in the UAE for meeting with officials and marks the latest boost the Arab world’s most populous nation has received from the GCC since the 2013 ouster of Islamist President Mohamed Mursi.

Together with my brother, President Abdel Fattah El Sisi we launched a joint strategic investment platform between the UAE and Egypt worth $20 billion to implement vital economic and social projects for our brotherly countries. pic.twitter.com/aCMPmA0Snm

Egypt is pushing ahead with a sweeping economic programme that was kick-started in 2016 with the devaluation of the currency in order to secure a $12bn International Monetary Fund loan and attract foreign investment. The country had been struggling to revive an economy that had largely stalled in the wake of the 2011 uprising that forced Hosni Mubarak from power after nearly 30 years.

The UAE and Saudi Arabia have been key backers of El-Sisi, who was elected a year after the military-backed uprising that drove Mursi from office. The two Gulf Arab states and Kuwait have pumped in billions of dollars in the form of cash deposits and investments to help El-Sisi’s government.

Egypt’s new wealth fund is being touted by the government as the latest component of the economic revival. The fund is aimed at helping the state better utilise its assets and to attract foreign investments that have, so far, been overshadowed by an infusion of overseas cash into the local debt market.

The government is currently in talks with the IMF for a new non-loan programme as its previous three-year arrangement winds down. The IMF has urged Egypt to work harder on boosting private-sector growth as a key driver for sustainable development in a nation of 100 million where around half live on or near the poverty line.