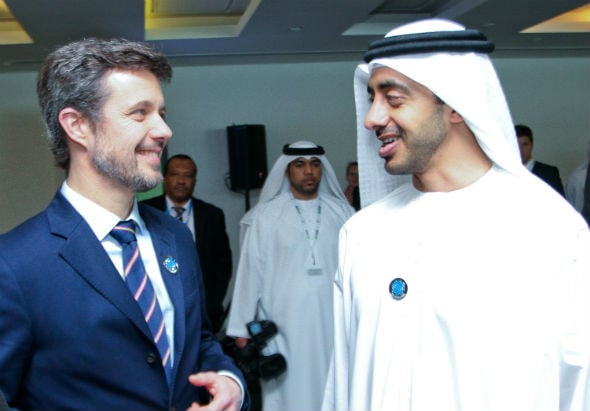 The UAE and the Government of Denmark signed a Memorandum of Understanding (MoU) on Monday, agreeing to nine areas of collaboration focussing on advancing renewable energy and global sustainability.

“The UAE, one of the major exporters of fossil energy, has enthusiastically embraced renewable energy,” said the Crown Prince of Denmark.

“It would have been much easier just to reap the financial benefits of this massive powerhouse. Instead you [the UAE] squarely confronted some crucial facts about your energy future.

“First, what happens when the abundant oil and gas reserves of the UAE run dry? Second, the country’s economy needs to diversify sooner rather than later. Third, a diversified economy will provide richer and more varied opportunity for educated young Emirati men who will enter the labour force. Finally, in the long run we must embrace renewables to meet the growing energy needs of the world.

“In this respect the UAE has adopted an admirable approach. You formulated a vision, stuck to it and acted.”

Denmark is a world leader in sustainability, generating close to 100 per cent of its energy from renewable sources with green technology products making up 11 per cent of the country’s total exports.

“Increased collaboration is critical in meeting rising global energy demands and mitigating the effects of climate change. Solving these two challenges, however, must be viewed as an economic opportunity in order to attract private sector investment and to push the boundaries of technology.”

“This partnership outlines specific opportunities and technology areas for us to share expertise and bring forward clean-energy and sustainability projecs.”

Executives from companies that will be affected by the agreement were also in attendance, including Anders Runevad, CEO of Vestas; Carsten Bjerg, CEO of Grundfos; Henrik Poulsen, CEO of DONG Energy; and Jakob Thomasen, CEO of Maersk Oil.