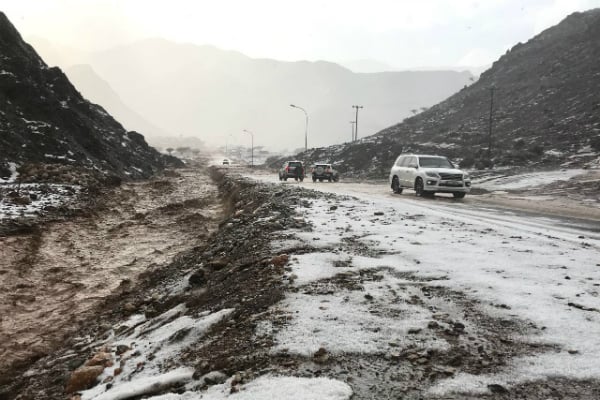 The UAE’s National Emergency Crisis and Disaster Management Authority (NCEMA) said late Sunday there had been no casualties reported after heavy rains forced hundreds of people to be moved into temporary accommodation.

The authority said a surface depression had inflicted heavy rains in the emirate of Fujairah, the city of Al Ain and Kalba and Khorfakkan in Sharjah causing the running of valleys and the flooding of some houses.

Up to 167 UAE nationals from Kalba were sheltered at a hotel in Fujairah. In addition, 558 people from 28 families in Fujairah were vacated and 24 households in Al Ain were put up at a hotel in the city.

Emirates Red Crescent said it had helped 140 people in Al Ain City and 48 in Kalba check into hotels. The aid provider said 600 people affected in Fujairah were also provided with meals.

The bad weather also led to temporary flooding in some areas of Dubai and forced the closure of the recently opened Dubai Safari.

Dubai Police said its Marine Rescue Station responded to three calls for help including a boat that capsized with seven men on board. All were rescued and the boat was towed to a safe area.

Another man was rescued after his boat capsized off of the Palm Jumeirah and an additional boat with one man on board was towed to safety in the Mina Seyahi area.

“The authority is liaising with all authorities concerned, including police and municipalities, to manage the current stormy weather and its efforts have contributed to reducing the aftermath of the situation,” NCEMA said.

“Meetings have been held over the past days with all relevant departments after forecasts of unstable weather have been received through the National Centre of Meteorology and Seismology on an expected surface depression that may inflict torrential rains, as a result of which people have been advised to stay clear away from running valleys.”

NCEMA said efforts had been made to withdraw piled water from areas that received heavy rains across Al Ain Region and Al Dhafra Region. Electricity has also been cut at some houses until floodwaters are withdrawn.

Brigadier Abdullah Mubarak bin Amer, deputy chairman of the Emergency, Crisis and Disaster Management Team of the emirate of Sharjah, said several tanks had been dispatched to drain water in Kalba.

The flooded Wadi Al Helo-Tunnel Road has also been cleared and traffic flow is returning to normal.

The UAE’s minister of infrastructure development said on Sunday the country had prepared a comprehensive plan for the rainy reason following a specialised study to determine the causes of landslides and flooding.

This included the design and building of a system to manage rainwater drainage at Exits 103, 110, 119 and 129 on Sheikh Mohamed bin Zayed Road in Dubai.

Dr Abdullah bin Mohammed Belhaif Al Nuaimi said the ministry was considering the implementation of a rainwater drainage system in regions that had previously suffered from flooding.

He said “practical solutions” would be adopted to prevent floods from reoccuring.

The UAE’s National Centre of Meteorology warned that unstable weather conditions affecting most parts of the country would continue on Monday before gradually subsiding in the afternoon.