The construction sector in the UAE is expected to grow between 6 and 10 per cent in 2020, according to new data from a KPMG survey.

KPMG’s annual Global Construction survey also found most (53 per cent) of construction industry executives are optimistic about the growth of the sector in the UAE in the next 12 months.

“The construction sector is the lifeblood of the UAE economy and it is very encouraging to see that the industry is expecting single to double digit growth this year,” said Sidharth Mehta, partner and head of Building, Construction & Real Estate at KPMG Lower Gulf, in a statement.

“As the pace of disruption accelerates, leaders will have to consider implementing a three-pronged approach to rationalise governance and controls, optimise human performance and innovate with technology, to become more future-ready.”

The survey, which polled senior executives from 223 engineering and construction companies, found that the biggest concerns for executives in the UAE are being able to deliver projects on time and within budget, with both those (44 per cent each) cited as the largest hurdles to overcome.

However, executives praised the use of innovative technology in the UAE to make construction both safer and more efficient. They cited digital modular fabrication (81 per cent) as the technology most likely to be implemented and have the greatest impact on the industry in the next 10 years. Intelligent construction equipment (56 per cent) and robots (25 per cent) were also predicted to have a significant impact.

As excited as survey participants were about new technologies, they still cited investing in a well-trained, capable workforce as a key requirement for any project.

“Construction companies that continue to invest in people and implement a technology-enabled strategic road map will be well positioned to face industry disruption and improve their capital and programme performance, putting them on the fast-paced track to growth,” said Mehta. 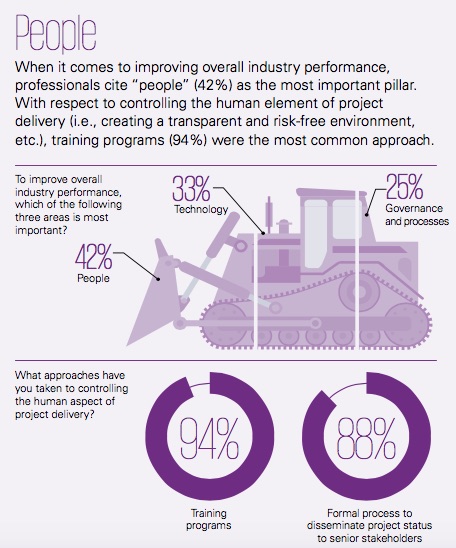 The survey comes as construction continues for a number of large projects throughout the UAE, particularly in Dubai, ahead of Expo 2020. Last Tuesday, Sheikh Mohammed bin Rashid Al Maktoum, Vice President and Prime Minister of the UAE and Ruler of Dubai, visited the Expo 2020 site to inspect progress.

450 days remaining for Expo 2020 Dubai, with 190 countries leading the world towards a better future through their pavilions for the first time in the MEASA. We are ready and remain true to our promise of hosting the best Expo edition yet in its 168-year history. pic.twitter.com/XPG18h9U5M

In May, Ahmed Al Khatib, chief development and delivery officer, told Reuters that all major projects related to Expo 2020 were on track for completion by the end of 2019.

The six-month long event, which opens its doors on October 20, 2020, features pavilions representing 195 countries. Scheduled to run until April 21, more than 25 million visits are expected.