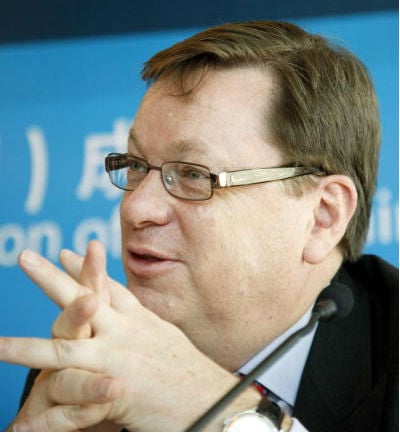 Thursby, currently CEO for the International & Institutional Banking Division of ANZ, has been appointed group CEO of NBAD effective July 1, the Abu Dhabi-based lender said in a statement.

He succeeds Michael Tomalin whose retirement from the bank after 14 years at the helm was announced a year ago. Tomalin will remain in a non-executive director’s role.

Almost 70 per cent owned by the Abu Dhabi government, NBAD is the most international of the United Arab Emirates’ banks with operations in 14 countries on four continents. It aims to be in 41 markets by 2021, mostly in Asia, Africa and the Middle East.

British-born Thursby was one of the main executives behind CEO Mike Smith’s push for ANZ to become a super regional bank. ANZ is expanding aggressively in Asia, where it now aims to double its earnings to up to 30 per cent of its total inside the next five years.

Thursby brings with him some 30 years of experience in international banking, most of it in the Asia-Pacific, the Middle East, Africa, Europe, America, Australia and New Zealand.

“He (Thursby) is extremely well-regarded across the market as a strong banking leader with a reputation for developing and growing businesses accompanied with a strong risk management approach,” the statement said.

Tomalin, credited with steering the bank into a raft of new businesses such as a brokerage firm, a property and leasing subsidiary and an Islamic banking unit, has been criticised by some for adopting a cautious approach in lending during a six-year, oil-fuelled boom between 2002 to 2008.

While that tack helped it escape the fallout from Dubai’s 2009 debt crisis – NBAD had the least exposure among top UAE banks to the emirate and its struggling real estate sector – bankers say the lender must become more aggressive in the crowded UAE market, home to some 50 local and foreign banks.

“Some local banks such as First Gulf Bank and others are snapping at NBAD’s heels and could overtake it in profitability soon,” said a senior banker. “NBAD needs to realise its full potential and be more of a risk taker.”

For Thursby, a big challenge in the new job will be sustaining the bank’s asset and profit growth both locally and overseas.