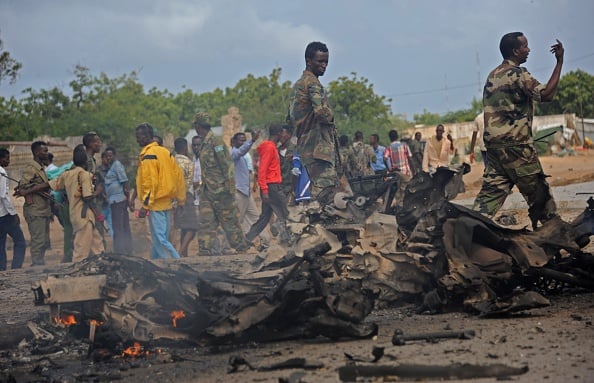 An UAE aid convoy, believed to have included ambassador to Somalia Mohammed Ahmed Othman Al Hammadi, was attacked by a car bomb in city of Mogadishu on Wednesday, UAE officials have said.

The UAE nationals were unhurt, but three Somali citizens were killed and several others were wounded in the attack carried out by Islamist militant group Al Shabaab.

UAE minister of State for Foreign Affairs Anwar bin Mohammed Gargash condemned the attack and also confirmed that none of the UAE aid workers were wounded.

“We are monitoring the situation and investigations into the accident,” he was quoted as saying by official news agency WAM.

“We will pursue our work diligently to support security, stability and development in Somalia,” he added.

Al Shabaab is a Somalia-based insurgent group that pledged allegiance to Al Qaeda in 2012. It is yet to link up to ISIL, the Al Qaeda-off shoot that has captured parts of Iraq and Syria.

The radical Islamist group has previously conducted deadly attacks inside both Somalia and neighbouring Kenya.

Recently Al Shabaab massacred 142 students in a Kenyan university while it also carried out a deadly attack in a shopping mall in Nairobi, killing 67 people.

Al Shabaab has not yet said that its target in the attack was the UAE ambassador but the Emirates has been proactive in helping Somalia counter terrorism within the country.

In May 2015, Somalia opened a new military training centre in Mogadishu that was funded by the UAE.

During its opening, Al Hammadi said in a speech that the new centre will help Somalia to train a force that will be able to protect the country. He also specified that it was important to confront the threat of Al Shabaab.

“The UAE will spare no effort to stand by the fellow Somali people, who have been enduring the scourge of the civil war and terrorism for more than two decades. The UAE is working hard to provide the necessary support that helps Somalia to restore its security and stability,” Al Hammadi said.