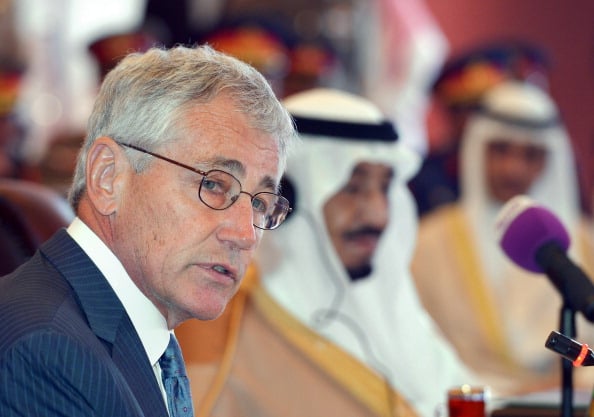 U.S. Defense Secretary Chuck Hagel said on Saturday that the embattled Syrian city of Kobani was a very difficult problem but added that air strikes had made some progress in driving back Islamic State militants.

Kurdish forces defending Kobani urged a U.S.-led coalition to escalate air strikes on Islamic State fighters who tightened their grip on the Syrian town at the border with Turkey on Saturday.

“We are doing what we can do through our air strikes to help drive back ISIL. In fact there has been some progress made in hat area,” Hagel told a news conference in Santiago, the Chilean capital.

“It is a very difficult problem,” Hagel said, referring to Kobani.

Hagel is on a six-day, three-nation trip to South America.

The U.S.-led coalition escalated air strikes on Islamic State in and around Kobani, also known as Ayn al-Arab, some four days ago.

Hagel underscored that the battle against the militants, who have seized swathes of Iraq and Syria, was a long-term fight.

“It is a long-term effort. This is difficult, it is complicated. It’s going to require many factors. And we are working now (with) coalition partners,” he said.

Asked about the situation in Iraq, Hagel said Iraqi security forces were in full control of Baghdad and continue to strengthen their positions there.

“We continue to help them with air strikes, with our assistance and advisors.”