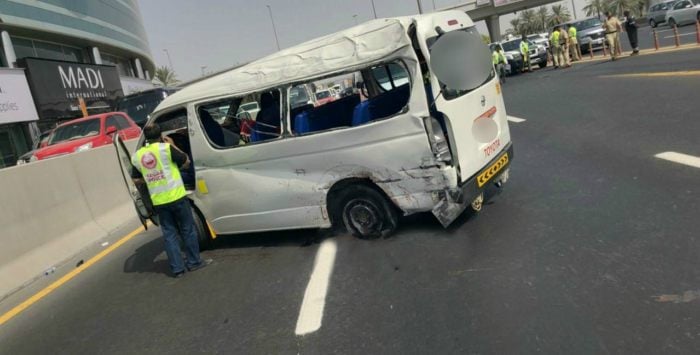 Two people were killed and five others were injured in a traffic accident in Dubai on Monday.

Dubai police confirmed that the accident occurred on Sheikh Rashid Street heading towards Dubai ahead of the Garhoud Tunnel.

Brigadier Ali Ghanem, director of the police station in Al-Muraqqabat, said that the command and control center received a message at 9.32am about the accident.

A van which was carrying seven people – along with the driver – crashed on Sheikh Rashid Road after one of the tyres exploded.

The vehicle collided with a cement barrier and a lamp post, resulting in the immediate death of a man and a woman, police said in a statement.

Four women were slightly hurt, while another suffered moderate injuries and was taken to Rashid Hospital in Dubai.

Ali Ghanem urged drivers to check the vehicles periodically – especially with regards to tyres – to ensure safety on the roads.