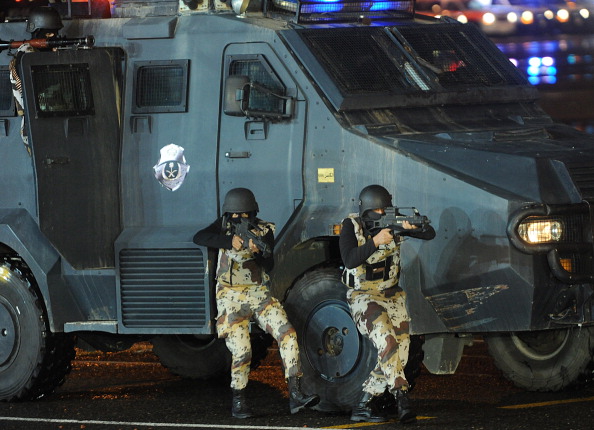 Saudi Arabian police clashed with foreign workers in a poor district of Riyadh on Saturday, nearly a week into a visa crackdown in which thousands have been detained and one man killed by police.

Security forces in riot gear fired into the air and used truncheons to disperse large crowds as scores of men ran through the streets, some throwing stones and other objects at cars and police, according to Reuters witnesses.

Two people were killed of which one was a Saudi while the other one was unidentified, the Saudi police said in a statement late on Saturday after it detained 561 people involved in the disturbances in the Manfuhah neighbourhood of southern Riyadh.

The police added that 68 people were injured.

Most of the foreign workers involved in the clashes appeared to be Africans.

In a previous statement, the police did not refer directly to Saturday’s clashes, or say how many had been injured or detained, but said that in light of “what has happened”, the authorities had designated a location for people to surrender voluntarily.

Authorities this year said they would no longer turn a blind eye to foreign workers breaking visa rules by working for companies that had not sponsored their entry into the world’s top oil exporter.

The intention is to end a black market for cheap imported workers, cut the foreign labour force, reduce the flow of remittances to other countries and make more private sector jobs available for Saudi citizens.

A seven-month amnesty for foreigners to rectify their visa status without penalty or leave the country – which prompted an exodus of hundreds of thousands of foreigners – expired on Monday, prompting the start of the crackdown. Thousands have been arrested.

On Wednesday, an Ethiopian was killed in a raid after he tried to grab a policeman’s weapon, the Arab News English-language daily reported on Friday.

Many of those caught in raids on shops, marketplaces, businesses and low-income residential areas are likely to be deported.

Many expatriate workers say they were unable to take advantage of the amnesty because of bureaucratic difficulties or disputes with their original sponsors.

In some streets in Manfuhah, men in Saudi dress had also gathered in small groups, some of them carrying knives and iron bars, saying they were protecting their property. Other people watched from rooftops.