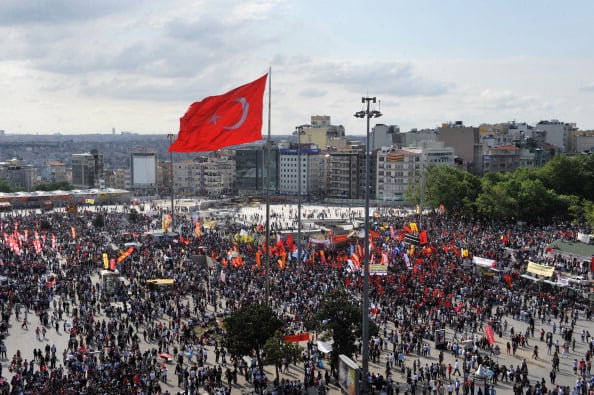 Anti-government protesters responsible for Turkey’s worst riots in years are “arm-in-arm with terrorism”, Prime Minister Tayyip Erdogan said, in a defiant response to four days of unrest in dozens of cities across the country.

Hundreds of police and protesters have been injured since Friday, when a demonstration to halt construction in a park in an Istanbul square grew into mass protests against a heavy-handed police crackdown and what opponents call Erdogan’s authoritarian policies.

The demonstrations showed no sign of abating on Monday with protesters returning to Taksim Square. Barricades of rubble hindered traffic alongside the Bosphorus waterway and blocked entry into the area. Leftist groups hung out red and black flags and banners calling on Erdogan to resign and declaring: “Whatever happens, there is no going back.”

In Ankara, police charged mostly teenage demonstrators and scattered them using teargas and water cannon. Protesters had erected a barricade in the Kizilay government quarter and lit a fire in the road as a helicopter circled overhead.

Erdogan has dismissed the protests as the work of secular enemies never reconciled to the election success of his AK party, which has roots in Islamist parties banned in the past but which also embraces centre-right and nationalist elements. The party has won three straight elections and overseen an economic boom, increasing Turkey’s influence in the region.

“This is a protest organised by extremist elements,” Erdogan said before departing on a trip to North Africa. “We will not give away anything to those who live arm-in-arm with terrorism.”

On arrival in Rabat, flanked by Moroccan Prime Minister Abdelilah Benkirane, Erdogan blamed parties that had lost elections for the violence, which he predicted would be short-lived: “In a few days the situation will return to normal.”

Turkey’s leftist Public Workers Unions Confederation (KESK), which represents 240,000 members, said it would begin a two-day “warning strike” on Tuesday to protest at the police crackdown on what had begun as peaceful protests.

The unrest delivered a blow to Turkish financial markets that have thrived under Erdogan. Shares fell more than 10 percent and the lira dropped to 16-month lows on Monday.

The United States called for restraint in a rebuke to its NATO ally. “We are concerned by the reports of excessive use of force by police,” Secretary of State John Kerry said in Washington.

Since taking office in 2002, Erdogan has curtailed the power of the army, which ousted four governments in the second half of the 20th century and which hanged and jailed many, including a prime minister.

Hundreds of officers, as well as journalists and intellectuals have been jailed over an alleged coup plot against Erdogan. The wind of change has swept also through the judiciary. Where Erdogan was jailed in the late 1990s for promoting Islamism by reciting a poem, a musician was recently jailed for blasphemy after mocking religion in a tweet.

Erdogan said the protesters had no support in the population as a whole and dismissed any comparison with the ‘Arab Spring’ that swept nearby Arab states, toppling rulers long ensconced in power with the help of repressive security services.

His own tenure in office, with its economic and political reforms, was itself the “Turkish Spring”, he suggested.

He gave no indication he was preparing any concessions to protesters who accuse him of fostering a hidden Islamist agenda in a country with a secularist constitution.

Some object to new restrictions on alcohol sales and other steps seen as religiously motivated. Others complain of the costs of Erdogan’s support of rebels in neighbouring Syria’s civil war. Still others bear economic grievances, viewing the disputed development project in Taksim Square as emblematic of wild greed among those who have benefited from Turkey’s boom.

Walls around Taksim were plastered with posters of a policeman spraying tear gas at a young woman in a red summer dress, her hair swept upwards by the draught of the spraygun.

“The more they spray, the bigger we get,” read the caption.

Western governments have promoted Erdogan’s administration as a democratic Islamist model that could be copied elsewhere in the Middle East after the fall of authoritarian leaders. They have expressed concerns about human rights standards discreetly, but last weekend’s events prompted the United States and the European Union to openly criticise police action.

With strong support, especially in the conservative religious heartland of Anatolia, Erdogan remains Turkey’s most popular politician and seems safe for now.

He said plans would go ahead to re-make Taksim Square, long a rallying point for demonstrations, including construction of a new mosque and the rebuilding of a replica Ottoman-era barracks.

The protests have involved a broad spectrum in dozens of cities, from students to professionals, trade unionists, Kurdish activists and hardline secularists who see Erdogan seeking to overthrow the secularist state set up by Mustafa Kemal Ataturk in 1923 in the ruins of the Ottoman Empire.